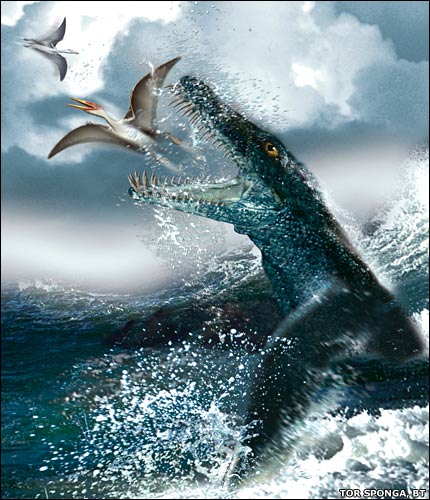 Just announced today on the BBC news website, scientists have unearthed the remains of a giant plesiosaur from the Arctic island of Svalbard.Coming in at 15 meters (50ft), it ranks as one of the largest known specimens of ancient marine reptile. Since there are other plesiosaur and mosasaur specimens that are known to approach 50ft in length, I’m assuming the reason that this species is given the term “monster” is because of its overall size. No species name has been given yet. Judging from past plesiosaur behemoths, I’m thinking that it might be Liopleurodon. Folks who saw the BBC series: Walking with Dinosaurs, might remember the Liopleurodon in one of the episodes. That one was a whopping 21m (70ft) in length. So, to date, it is still an unrealistic size.That said, there sure were a lot of giant marine reptiles swimming around the Mesozoic seas.

It is interesting to note that there has yet to be a fossilized sea animal (or any animal) that approaches the monstrous blue whale (Balaenoptera musculus) in terms of overall size (giant jellyfish [Cyanea capillata] grow longer, but have nowhere near the mass). Off the top of my head, the largest prehistoric fish was the Jurassic giant: Leedsichthys problematicus, which has had length estimates very close to blue whales (~30m, or 98ft). There was one ichthyosaur that exceeded “the monster” in length, but might have fallen “short” in terms of overall mass (Shonisaurus sikanniensis). All in all, B.musculus stands alone in terms of oceanic giants. What was imposing this size limit on all the Pre-Tertiary marine fauna? One possibility that I’ve heard tossed about (and the only one that I happen to think is on the right track) is that the reason for the size of blue whales, is due to the prevalence of krill (order: Euphausiacea). 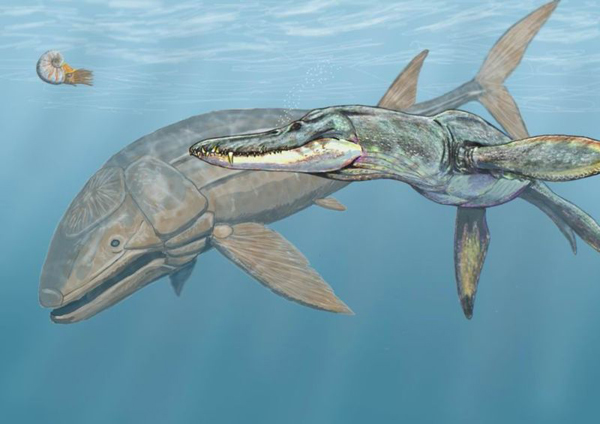 Krill are way down at the near bottom of the food chain. They eat plankton and are, in turn, eaten by a huge chunk of the marine ecosystem. Krill are global in their distribution, and their biomass is astronomical (500 million tonnes, according to Wikipedia). So why is this important?Well, if we look back at all the large marine reptiles, or most of the large prehistoric marine vertebrates; all of them were large predators. “The Monster,” Kronosaurus, Liopleurodon and most of the others, all had a taste for meat. The problem with this, is that a large meat eater requires lots of meat in order to survive. This imposes a size limit right away. Either a large marine animal is going to eat shoals and shoals of small fish (which may reproduce rapidly, but probably not rapidly enough to maintain a viable population of large carnivorous marine vertebrates), or it is going to eat any large animal that it can take down. If shoals of fish can’t maintain a viable population of marine behemoths, then anything bigger will certainly not. Large marine animals with big appetites, need something that can take the hit and keep on going.Krill and plankton provide the only real option for giant marine animals. And it just so happens that we are currently living in a time period where most of the oceans are temperate.This is important. Temperate waters mean that there is a section of ocean that is very cold and a section that is warm. This results in upwelling, or the pushing of nutrients from the bottom of the sea, up to the top where it can be used by other life forms (namely: plankton, squid and krill) to make energy. The importance of thermohaline circulation for all of this cannot be discounted either. Both result in the necessary conveyor belt like mixing of oceanic nutrients.

So more nutrients results in greater biomass of krill, which allows for the evolution of large marine animals beyond the 15 meter / 30 tonne mark. Today that niche happens to be filled by mammals. Why?

Is there something special about their physiology that allows only them to grow to this size?

No…not really. Most likely, mammals just so happened to be big enough at the right moment in time.

If Antarctica, or Australia had moved closer to the South Pole and iced over, then we would have had a thermohaline circulation in the Mesozoic, and most likely, giant planktivorous marine reptiles. It didn’t so the best we got was the smaller, yet equally impressive: Leedsichthys problematicus. Incidentally, it probably was a planktivore; though it probably relied on the less productive tropical plankton spawns (not much choice, given the time period).

Nevertheless, these were all truly awesome animals. I look forward to seeing what else these Arctic islands are going to give up.