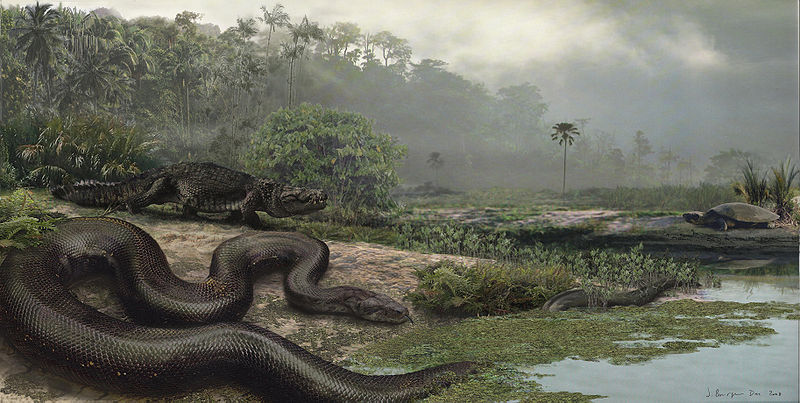 I was trying to wait until I could nab the papers for these guys, but since Geology does not feel like updating their site, I’m going to have to move without them.

Reported on 1st February, John Tarduno of the University of Rochester, and his team have discovered an alleged freshwater turtle fossil in the Canadian Arctic. The animal – given the gorgeous name of Aurorachelys (“Dawn turtle” or “Arctic turtle” as the case may be) – was found in strata dating back to the late Cretaceous. According to the press release (which is all I have to go on at the moment), the presence of the turtle has lead Tarduno and his colleagues to suggest the presence of an immense halocline in the paleo-arctic ocean.? According to Tarduno:

…the Arctic Ocean was more separated from the rest of the world’s oceans at that time, reducing circulation. Numerous rivers from the adjacent continents would have poured fresh water into the sea. Since fresh water is lighter than saltwater, Tarduno thinks it may have rested on top, allowing a freshwater animal such as the aurora turtle to migrate with relative ease.

The other major discovery came out today in Nature.? Researcher Jason Head, and colleagues have discovered the world’s largest snake. The new snake has been dubbed: Titanoboa cerrejonensis, and it has been estimated to grow to a whopping 13 meters in length (43ft) and could have weighed as much as 1,135kg (2,500lbs).? The fact that this immense animal even existed, is amazing enough, but the researchers took their find a little further.

Since snakes are poikilotherms that, unlike humans, need heat from their environment to power their metabolism, the researchers suggest that at the time the region would have had to be 30 to 34 degrees Celsius for the snake to have survived. Most large snakes alive today live in the South American and southeast Asian tropics, where the high temperatures allow them to grow to impressive sizes.

This is where I have my problems. First for Aurorachelys; how are the researchers determining that this animal was a freshwater turtle? As I mentioned prior, I have not had a chance to read either of these papers yet, but just off the top of my head, I can’t think of any specific osteological trait that can be used to determine whether an animal is capable of salt-excretion (i.e. marine). Edit: See Nick’s comment for a list of papers on osteological correlates to salt excretion. This is what I get for posting something right before bed. 🙂? Are the researchers, instead, using the extant phylogenetic bracketing method (EPB), and figuring that Aurorachelys was a freshwater inhabitant, based of critters it was most closely related to?

If it’s the latter, then I have reason to pause. Uniformitarianism, or the assumption that present day processes are likely the same now as they were in the past, is a very useful tool.? It’s especially useful in the realm of geology, where rock cycles are unlikely to have changed.? In biology, too, uniformitarianism can be helpful for studying processes like evolution and ecological partitioning. However a uniformitarian view of life is much less sturdy when dealing with more labile things like behaviour, or the evolution of a specific trait. If the researchers are assuming that Aurorachelys was a freshwater animal based off of EPB, then I would have to assume that salt excreting glands must be a hard thing to evolve. But are they? I’m not sure we have an answer there.

Another issue this raises is, if Aurorachelys was a freshwater turtle that was cast adrift, then what are the chances that it would have been fossilized in the first place. Fossilization is a one in a million process as it is. In general, parsimony tells us that unique individuals / behaviours, are unlikely to be preserved. When we find a giant representative of a species, it probably was not unique, but rather a high end average animal. So too, it would seem, with Aurorachelys.? It is highly unlikely that this turtle was caught out of its element.? This may mean that this large halocline was present and that freshwater turtles were undertaking this migration rather often, or it means that the ability to remove excess salt from the body, was present in this species. Interestingly, a similar situation exists for the giant alligatoroid Deinosuchus. Salt excreting glands appear to be a unique adaptation of crocodyloids,? and not their alligatorish kin. Yet Deinosuchus founds some way to cross the saltwater filled Western Interior Seaway. Again, how hard is it to evolve salt removing glands?

The case of Titanoboa cerrejonensis is much the same. In this case, it appears to be a clear case of the erroneous belief that reptiles make good ecological thermometers; despite the presence of leatherbacks (Dermochelys coriacea) in the freezing Northern Atlantic, or the small Chinese alligator (Alligator sinensis) living in a part of China that readily freeze, or even the relatively tiny Andean lizards ((Liolaemus multiformis), who live in parts of the Andes mountain range that experience an average daytime temperature of 10Â°C (50Â°F) , all while maintaining body temperatures of 35Â°C (95Â°F). Both the Aurorachelys and Titanoboa cerrejonensis papers appear to make assumptions that seem questionable given the evidence.? However I will reserve final judgement until I’ve had a chance to read the respective papers. Hopefully there is some hard evidence to back up the assertions that have been proposed. 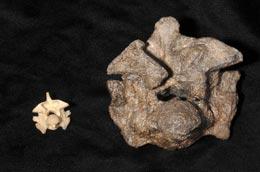 Until then, check out the comparison on the vertebrae of a large Eunectes murinus (green anaconda) and Titanoboa cerrejonensis. This beast was huge.

5 Responses to Two new paleo-herps illustrate the problems of a persistent reptile myth.