I’m a little behind on this now 3 day old story. It’s been hard to get back into the proverbial swing of things. I believe part of it has to do with the large dearth of nothing that occurred during my “vacation.” The other part probably has to do with being bloody busy. >:)

And here’s a brief excerpt:

In 1971, scientists transplanted five adult pairs of the reptiles from their original island home in Pod Kopiste to the tiny neighboring island of Pod Mrcaru, both in the south Adriatic Sea.

After scientists transplanted the reptiles, the Croatian War of Independence erupted, ending in the mid-1990s. The researchers couldn’t get back to island because of the war, Irschick said.

The transplanted lizards adapted to their new environment in ways that expedited their evolution physically, Irschick explained.

The big and most interesting part of this story is how these amazing little saurians evolved new behaviours, a majour change in diet and they evolved a new physical characteristic (cecal valves in the intestine).

All of this happened in only 36 years! 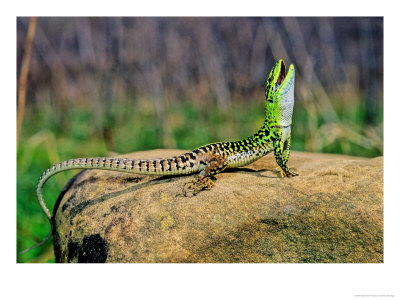 Podarcis sicula; a representative of the species used in the study. Also, a bit of a show-off.

Prior to this study, the only thing that even came close (in tetrapods) was an “earlier” study by Jonathan Losos on Caribbean Anolis. In one study, Losos found rapid evolution of longer hindlimbs in introduced species of Anolis in as little as 14 years. The results were interesting, but were more a case of an amazing case of Natural Selection changing the frequency of a naturally occurring variation. This latest study is a little different. The kind of changes noticed here are normally the ones talked about in insects, or bacteria (i.e. large phenotypic changes).

It has been argued by some that this finding might be viewed as more fuel for the nutty creationist movement. Proving that evolution can occur quickly, means that creationists can argue better for a Young Earth. However, since the core tenet of creationism is that life does not evolve, this would do quite the opposite for them.

What this does bolster evidence for is Gould and Eldredge’s theory of Punctuated Equilibria.

The theory states that most of the time, populations of organisms remain fixed and stable, with very little evolution occurring. Then, when a portion of the population gets segregated and/or are forced to adapt to a different environment, evolution kicks into high gear. Change happens rapidly, and the new population becomes a new species.

That was a bit simplified, but you get the point.

Gould and Eldredge used fossil trilobites to support their case. Studies on plants and insects have also shown that this type of speedy evolution can happen. Now we have proof in a relatively large vertebrate as well.

I think these kinds of observations are good for the biological and paleontological sciences. I think that there is a tendency for paleontologists to “ride the brake” with evolution. Always insisting on measuring evolutionary change in millions and tens of millions of years. I don’t have a problem with this type of thinking when one is looking at changes in whole families and genera, but it seems very unlikely that many of the species seen in the fossil record were evolving so slowly from species to species (e.g. Tyrannosaurs, or mosasaurs). Showing that speedy evolution does happen, helps to better support a more “punctuated” view of evolution. One in which whole genera can arise in as little as a few thousand (or hundred thousand) years.