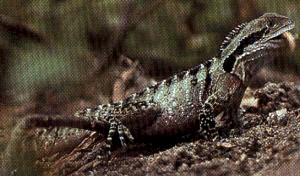 Lacertilia (aka: Sauria) is the group of reptiles that includes the lizards. This group is a subset of the order Squamata.

Lacertilia is a huge group that comprises 5,079 species and is the largest living group of reptiles.

Lacertilians have adapted themselves to live in almost every environment in the world. They can be found in the tropical rainforests of Brazil and Madagascar, throughout deserts such as the Sahara, in the ocean and even in highly urbanized areas of the world.

At its core, Lacertilia is divided into two major groups:

This division is based off of the very different ways that these two groups look for food. Iguanians are sit and wait predators that are very territorial, and visually oriented. This is the group that many common household herp pets come from (e.g. bearded dragons and green iguanas).

Scleroglossa (="hard tongues") in contrast, are composed of animals that are wide ranging active foragers. Scleroglossans rely heavily on chemosensory information, and have enhanced their vomeronasal organ and tongues, to allow for this. Classic scleroglossans include animals like monitor lizards, and skinks.

Within Scleroglossa another sharp division exists. It divides into the Gekkota (geckos) and the Autarchoglossa (skinks, varanids, and everything else).

The lacertilians below are listed by their families. Next to the names are a basic description of the types of lizards to be found there. From there it gets broken up into genera, with a species list to follow.