Crocodile tears are real. Who knew? 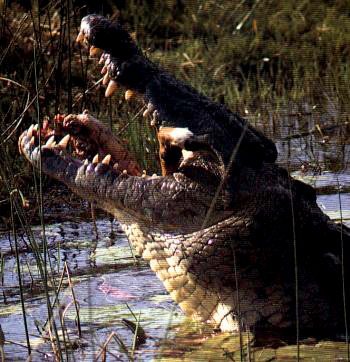 We’ve all heard the old wives tale about crocodiles crying during feeding. Many of us have probably also run across numerous references that discount this statement. That said, there has never been much scientific interest in determining whether, or not crocodiles actually cry.That has just changed:

The subtitle there translates to: “And they eat them weeping.”

The aforementioned authours were studying an apparent phenomenon in humans called: parareflexes. The hypothesis for this goes that a screwup in our normal genetic makeup, may result in the expression of traits/behaviours from an older phylogenetic time. Interestingly, the hypothesis came about from the supposed phenomenon of crocodile tears. In this case, the hypothesis is assuming that the trait of crying while eating, is one that was found in the last common ancestor between humans and crocodiles (over 300 mya). Er, yeah.

Coming back to the story, the authours tested Alligatorids (2 caiman species and the American alligator) from the St. Augustine Alligator Farm in St. Augustine Florida, USA (highly recommended for folks who like crocs). The animals were trained to walk up on the bank, out of the water, and accept food from there. All the animals were dry when they came up to eat.

The results showed that crocodylians do cry while eating. At least, they seem to when eating away from water (rather hard to tell if they are crying while in the water). They also show a large amount of bubbling around their eyes. Stranger still, the eyes cry at different rates (i.e. one eye has more bubbles and water than the other).

So what does it all mean?

That, the authours didn’t delve too much into. They mentioned that the phenomenon they witnessed was different from the one mentioned on Adam Britton’s site. The authours suggest that this might be a byproduct of crocodylian anatomy. Due to the extensive sinuses found in crocodylian skulls (see: here), there is a connection between the nasolachrymal duct (the nose/tear ducts) and the nasopharynx (where the internal nostrils meet the throat). The authours speculate that during bouts that involve pushing air back and forth through this duct (e.g. feeding, or extensive fighting), the lachrymal glands are stimulated to release tears. This would also explain why there was bubbling found in nearly all the animals studied.

So crocodylians cry; but they still don’t seem to do it out of remorse. I guess this makes the old wives tale only partially true.

2 Responses to Crocodile tears are real. Who knew?