Alligators can shift their lungs and lizard ecology determines movement.

There were two new papers released today in the Journal of Experimental Biology.

The first one is the biggest, as it received a news story.

We used electromyography on juvenile American alligators to test the hypothesis that the following muscles, which are known to play a role in respiration, are recruited for aquatic locomotion: M. diaphragmaticus, M. ischiopubis, M. rectus abdominis, M. intercostalis internus, and the M. transversus abdominis. We found no activity with locomotion in the transversus. The diaphragmaticus, ischiopubis, rectus abdominis and internal intercostals were active when the animals executed a head-down dive from a horizontal posture. Weights attached to the base of the tail resulted in greater electrical activity of diaphragmaticus, ischiopubis and rectus muscles than when weights were attached to the head, supporting a role of this musculature in locomotion. The diaphragmaticus and rectus abdominis were active unilaterally with rolling maneuvers. Although the function of these muscles in locomotion has previously been unrecognized, these data raise the possibility that the locomotor function arose when Crocodylomorpha assumed a semi-aquatic existence and that the musculoskeletal complex was secondarily recruited to supplement ventilation.

Scientists at the University of Utah have discovered the unique internal subtleties that allow crocodylians to sink, rise, pitch and roll; all without disturbing the water (much). It turns out that the main muscles used for breathing, are also used to actually shift the lungs within the body!

That’s just crazy awesome. Uriona & Farmer’s work raises the question of how prevalent this ability is in other semi-aquatic animals (e.g. seals, terrapins, manatees). By shifting the lungs further back in the body, crocodylians are able to change their local density. This allows the front, or back of the animal to rise and sink separately from the rest of the body. So too does moving the lungs from side to side allow for rolling in the water. All of this can occur without the need to move any external body parts. This means no extra turbulence gets created in the water, thus allowing crocodylians to better sneak up on their fishy, or fleshy prey. 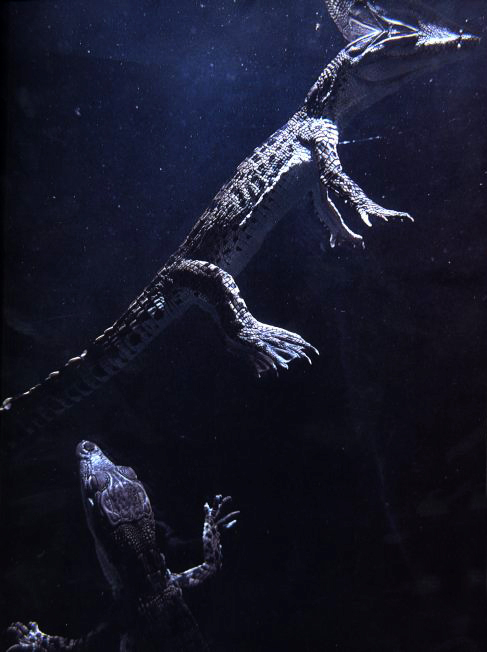 If anything, it sure speaks to why crocodyliformes have held dominion over the semi-aquatic niche for over 200 million years. Uriona and Farmer do suggest that the ability of these respiratory muscles to do this might not be an exaptation. Rather, this might have been the initial impetus behind the evolution of these muscles. Only later would they have been exapted to help with breathing on land. Though the authours provide some good parsimonious reasons for why this may be (basically it would take less evolutionary steps to accomplish than the other way around), it doesn’t really jive with the fossil evidence. Part of the reason why the crocodylian diaphragm works, is because the pubis (the forepart of the hip bone in most animals, and the part that juts out so prominently in theropod dinosaurs), is mobile. This mobility occurred early on in crocodyliforme evolution, with the crocodylomorph Protosuchus having a pubis that was almost mobile. The problem arises when one looks at this early crocodylomorph. Protosuchus was obviously terrestrial. If Protosuchus was evolving a mobile pubis already, then it was doubtful that it was being used to allow lung shifting in the body (an ability that is helpful when underwater, but pretty pointless on land). Furthermore, Crocodylia proper is the umpteenth time that crocodyliformes have returned to a semi-aquatic existence. It is doubtful that all the numerous land outings that occurred during crocodyliforme evolution, would have retained the ability to move the lungs to and fro. It seems far more likely that this was an ability that evolved in Crocodylia, or somewhere close by on the evolutionary tree, in some taxa that was still semi-aquatic.

Of course it is also possible that crocodyliforme phylogeny is just all f-ed up. With the amount of convergence rampant in that lot, this remains a distinct possibility.

Either way this is a cool discovery, and one worthy of adding to the crocodylian pages.

The second paper also comes from the Journal of Experimental Biology. This one involves lizards.

Foraging mode has molded the evolution of many aspects of lizard biology. From a basic sit-and-wait sprinting feeding strategy, several lizard groups have evolved a wide foraging strategy, slowly moving through the environment using their highly developed chemosensory systems to locate prey. We studied locomotor performance, whole-body mechanics and gaits in a phylogenetic array of lizards that use sit-and-wait and wide-foraging strategies to contrast the functional differences associated with the need for speed vs slow continuous movement during foraging. Using multivariate and phylogenetic comparative analyses we tested for patterns of covariation in gaits and locomotor mechanics in relation to foraging mode. Sit-and-wait species used only fast speeds and trotting gaits coupled with running (bouncing) mechanics. Different wide-foraging species independently evolved slower locomotion with walking (vaulting) mechanics coupled with several different walking gaits, some of which have evolved several times. Most wide foragers retain the running mechanics with trotting gaits observed in sit-and-wait lizards, but some wide foragers have evolved very slow (high duty factor) running mechanics. In addition, three evolutionary reversals back to sit-and-wait foraging are coupled with the loss of walking mechanics. These findings provide strong evidence that foraging mode drives the evolution of biomechanics and gaits in lizards and that there are several ways to evolve slower locomotion. In addition, the different gaits used to walk slowly appear to match the ecological and behavioral challenges of the species that use them. Trotting appears to be a functionally stable strategy in lizards not necessarily related to whole-body mechanics or speed.

I haven’t had a chance to read much more than what was written already. I do take a bit of offense to the authours referring to scleroglossan foraging technique as “slow,” but what are you going to do?

I do find it interesting that lizards seem to have lost the ability to “walk” numerous times. That almost seems bizarre. The study points out that ecology produces heavy pressures on lizards in terms of their locomotion type. This is extremely pertinent given how often one hears the old (and wrong!) adage about “reptiles” being incapable of intense aerobic activity.

According to the above study (among others), it all depends on the animals being tested.

There we go. Two really cool papers on reptiles, being released in one day.