A Tribute to Alex

This was something that I had meant to mention on my site for months now. In fact, I meant to write about it the day it was announced. It’s in regards to Alex, the African grey parrot. 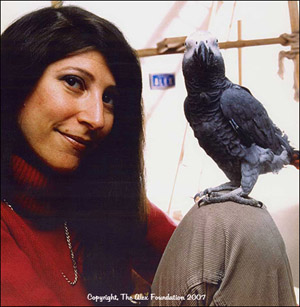 Maybe I should be writing it: A.L.Ex. The name given to him was an acronym for: Avian Learning Experiment.

Alex was the pet/research subject/friend of Dr. Irene Pepperberg. He and Dr. Pepperberg made headlines time and time again for Alex’s remarkable vocabulary.

Alex could say over 150 words. That, in itself, is neat, but not noteworthy. What made things noteworthy was that Alex actually understood these words. Most parrots are taught words by their owners for the sheer novelty of it. The birds don’t really understand the meaning behind what they are saying, and the owners don’t really care about teaching them. Dr. Pepperberg and Alex showed that this need not be the case.

A research assistant knocks on the door. Dr. Pepperberg answers the door and says: “Hello Arlene” (or whomever). Then she would say: “Hello Irene.” After several reenactments, the Dr. would then go to Alex and say: “Hello Alex.” By going through this process, Alex was able to associate the words he was saying, with the actions being performed.

Being a smart cookie, once Alex caught on to this, his vocabulary was able to increase substantially. Dr. Pepperberg did other studies. She showed that Alex could count to four (hmm, doesn’t that sound familiar), could distinguish the constitution of various objects (plastic, wood, wool, etc.), and could tell which items were larger than others. Towards the end of his life, Alex was even being taught to associate the written form of English words, to the spoken version. Alex’s accomplishments were astounding.

So, too, was his criticism. Anytime a scientist shows animals acting like people, others are ready to pounce on the anthropomorphic idea in an attempt to discredit it. This is all fine. After all, science is nothing without a healthy dose of skepticism. Sometimes, though, I feel that the critics tend to take their assumptions a little too far. An infamous example of this was found with the horse Clever Hans. The horse’s owner insisted that Hans could count and do arithmetic. People from far and wide would come to test the horse’s skills. All were astounded at the remarkable prowess of this equine to calculate their math problems. All, that is, except for psychologist Oskar Pfungst. Through a series of tests he discovered that Hans was not actually doing any math at all, but was instead reading the subtle cues of the questioner. If the questioner was expecting a certain answer, then Hans would get the math right. If Hans could not see the questioner, or the questioner did not know the answer themselves, then Hans would keep stomping till the cows came home. 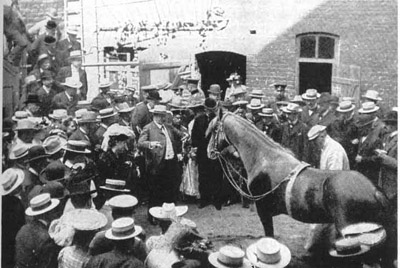 One of Clever Hans’ performances

The results were unequivocal. Hans was not a math genius. This was fine, and totally agreeable. The expression from there that the animal was not intelligent at all, was where I draw the line. There was obviously a degree of mental work involved. The horse knew its name, and was able to read subtle body language that no one, not even the psychologists who did the study, could see. That’s damned impressive.

So there were all these criticisms that Alex was just doing an even more complex “Clever Hans effect.” Yet, despite criticisms of the results, no one ever showed that Alex was faking it. In fact, Alex showed continual improvements throughout his life. His use of human words to express what he saw around him was amazing.

More amazing, was how Alex would use his words to express his own feelings.

When Alex was tired of testing, he would say: “Wanna go back,” (in reference to his cage)

If the researcher was getting annoyed, Alex would say: “I’m sorry.”

Alex learned not only the names of objects that he was being tested on, but he also learned the words for all the rewards he would get. When Alex would get something right, he would then have to say what prize he wanted to have.

For instance, if he wanted a nut, he would say: “Want nut.”

If it was a banana then he would say: “Want banana.”

Throughout Alex’s thirty years of study, Dr. Pepperberg never once referred to what he was doing as language. She was always reticent of placing that symbol on Alex. This is understandable. Alex did learn to speak human words, but he had yet to learn syntax. That is to say, he couldn’t yet combine words for use in other situations other than their specific descriptions.

But he got awfully close. In one instance, Alex was presented with an apple. Alex had not learned the word apple at the time, so he came up with his own word for it. He called it a “banery.” Alex knew “cherry” and he knew “banana.” The result was the portmanteau: banery. This was not the only time he coined neologisms. Presented with the same scenario, only this time involving an almond, Alex called it: “cork nut.” Other neologisms of Alex included: “rock corn” (unpopped corn kernels), “pah-corn” (popcorn) and “grey nut” (sunflower seeds). For these last group of words, researchers would, essentially, reward Alex with food that came closest to the words he was uttering. If Alex liked the food, it would become part of his normal rewards, and he would retain the word. If he didn’t like it (e.g. “rock nut” for a Brazil nut that Alex couldn’t open, and didn’t eat even after receiving help), then he would not use the word and it would leave his vocabulary. 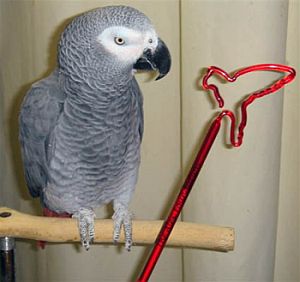 Alex was amazing. Unfortunately Alex is no longer with us. Last September, Alex suffered an apparent heart attack and died in his sleep. He died at 31 years old; nineteen years short of the average lifespan for African grey parrots. Veterinary checkups two weeks before had found nothing suspicious, or at risk with Alex. His death came as a complete shock.

Though gone, Alex’s accomplishments will live on in scientific knowledge. Alex was one of the trailblazers for animal intelligence, and the concept of animal consciousness. He was bought at a local pet store. There was nothing special about him when he was acquired. His unremarkable origin helped to show that Alex’s abilities and his potential could be found in all African grey parrots. Dr. Pepperberg laid the groundwork for studies of animal intellect and consciousness in other species. If an African grey parrot can learn all this, could a macaw? How about a raven? Suddenly the term “bird brain” was no longer a derogatory one.

One of the most important things that Alex did for this field, was that he gave us ample proof that there is more going on inside a non-human mind than we are often willing to give credit. Much like Helen Keller, once Alex learned to talk, his personality and uniqueness became very apparent. Alex raised very pertinent questions about the use of animals in laboratory experiments, and the ethical ramifications that it brings up. Same for the slaughtering of animals for human consumption*.

Alex will be missed by all whose lives his work has touched. I only wish I could have written this earlier.

I’ll end this with the last words that Dr. Pepperberg (the last one to see Alex) heard Alex utter:

*Now don’t go thinking I’m about to join PETA. I’m an avid carnivore with no plans on quitting anytime soon. That said, I do believe it is important to kill things in a more humane way than we have been doing.

This entry was posted in Uncategorized and tagged african grey parrot Alex alex died alex dies alex the african grey parrot animal intelligence parrots
« New study finds that numbers are inherent to humans…and… Tuataras do it faster than anyone else. »

2 Responses to A Tribute to Alex