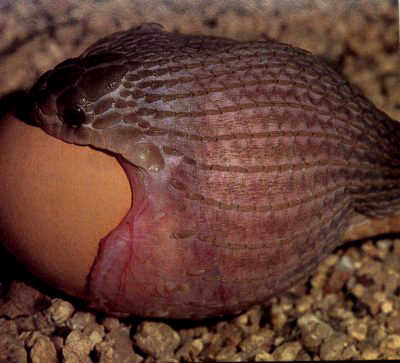 Being limbless creatures, snakes are faced with a rather pressing problem, getting food.

While some snakes grab their food and constrict it, others prefer to inject deadly venom into their prey. Either way though, all snakes must deal with the next problem. How to eat it.

With no limbs to provide leverage, snakes cannot easily tear up their food. In fact, they can't tear it up at all. Instead they are forced to swallow their food whole and in order to do this, some remarkable advancements have been made to their bodies.

When a snake, say a cornsnake (Elaphe guttata guttata) captures a prey item, say a mouse, it then begins the amazing process of forcing itself over the mouse.

First the snake locates the head. All snakes eat their prey headfirst, it makes the swallowing of limbs so much easier. There are occasions where a snake will go tail first, but they are hardly normal. 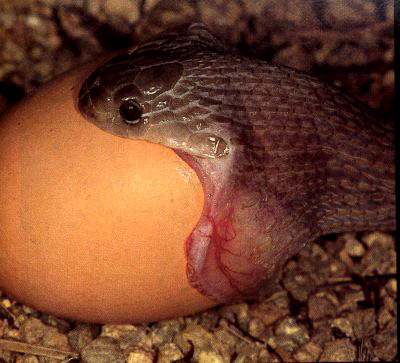 After locating the head, the cornsnake then begins the process of swallowing. First it opens it's jaw and takes the animal into it's mouth. As this happens, the jaw will continue to expand around the animal until it has eventually covered the entire creature. Once the basics are done and the mouse has started to enter the snake's mouth, it then alternately moves it's jaws forward and to the sides. The snake actually moves one mandible at a time.

All of the above are also assisted by powerful jaw and throat muscles, little teeth on the roof of the mouth and glands that secrete salivary juices which moisten the intended food item. 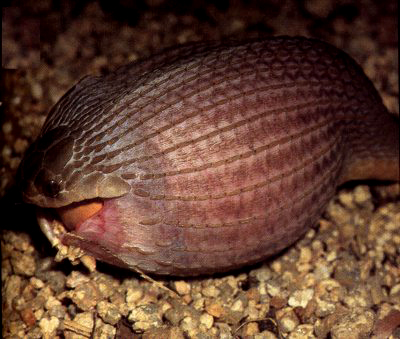 This form of eating is so amazing and rare that it is only found in snakes. Amphisbaenians, blindworms and caecillians all achieve their dietary requirements by eating early and eating often. Due to their unique method of feeding, there are no living analogues to snakes in this category. 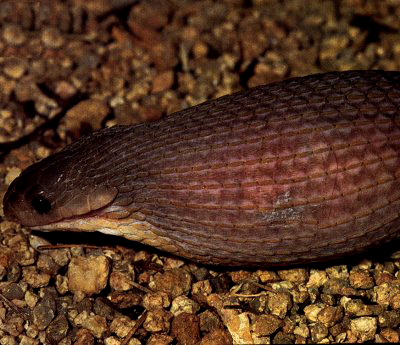 So how is this amazing method achieved? What allows the snake to distend it's jaws and swallow food many times it's own head size?

Well all of the above can be answered with a quick look at snake anatomy.

Unlike other tetrapods, which have strong jaws with fused mandibles, snakes have foregone that route and lost the strong bite in favor of the expandable jaw. One can see an obvious difference when looking at the skulls of reptiles compared to the skulls of mammals. In most reptiles, the skull has been aired out and poked full of holes (fenestrae). These holes allow for the attachment and expansion of larger jaw muscles while at the same time lightening the skull. In squamates one can see how far this has gone. 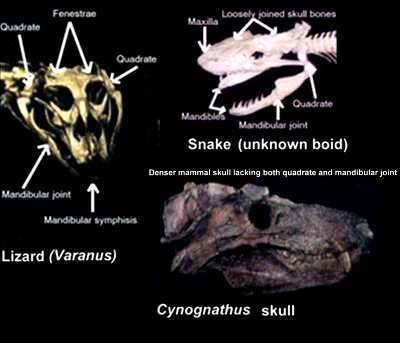 In a typical lizard we can see the loss of the Jugal bone which frees up the quadrate and allows for a wider swing of the jaw (thus allowing the lizard to swallow larger food items). In snakes, the jugal and the upper temporal has been lost. Note also how the mandibles are no longer connected to each other and can actually move freely of one another (a condition known as: mandibular liberation). The mandibles are only connected through a ligament that stretches between the distal end of each mandible. Along with that, each mandible has a joint midway down it which allows it to bow outwards. By having a stretchy lower jaw rather than a rigid one, snakes are capable of expanding their jaws to accomodate large prey. 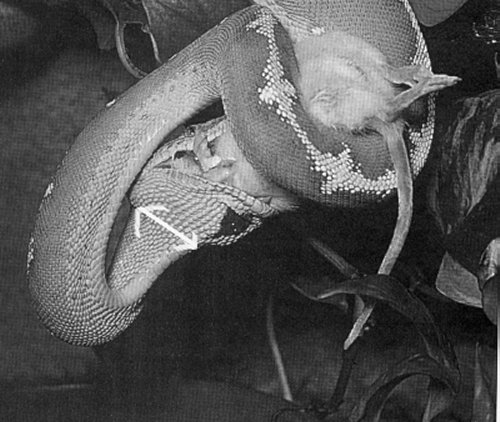 Along with the lower jaw, the upper jaw has also been redone. The quadrate bone is enlarged and slants backwards and outwards thereby giving the jaw extra swinging room (snakes can swing there jaws almost 1800) The bones of the snout and braincase are loosely attached so as to allow for more flexibility. The top of the jaw (palate) has a total of four rows of sharp recurved teeth which aid in the swallowing process.

Several pairs of muscles originating on the braincase, insert themselves along the two palatopterygoid bars (named for the uniting of the pterygoid bones with shorter palatine bones). These muscles flex the maxillary bones allowing the upper jaw to move forward, backward, up and down (prokinensis).

Buy separately moving each mandible along with the outward and forward sweeping of the palatomaxillary arches, snakes are able to "walk" their heads over their prey. 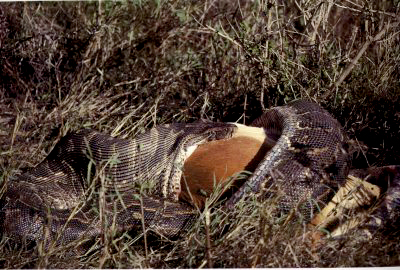 Along with amazing skulls, snakes also are able to swallow large prey due to their lack of a sternum and shoulder girdles. This frees up the ribs and allows them to expand to accomodate the large prey.

Snakes only have one lung decreasing the chance of large prey reducing lung room. Snake tracheas open anteriorly rather than way back in the throat. By having such a anterior trachea, snakes are able to keep their air tubes clear while swallowing.

That last thing that snakes have which allows them to swallow such large prey is their very elastic skin.