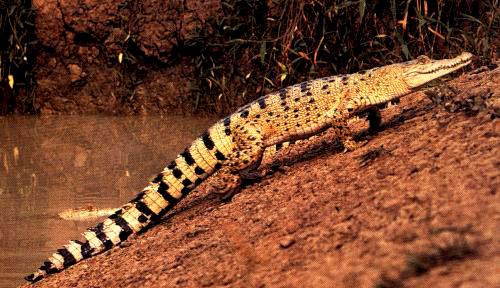 The estuarine crocodile is the largest of the living crocodylians. It is also the most widely distributed and the most dangerous. Incidentally these crocodiles also have more aliases than any others. From saltwater, to Indopacific, these names can get pretty confusing.

So which one is the most accurate?

Well Saltwater crocodile, while nice and descriptive is sorta misleading. While these are the most pelagic (sea going) of the crocodylians, they are not the only ones. Nor do they spend their lives at sea. These crocs mostly use the sea as it's transportation and spend most of their hunting time in fresher water. So maybe calling them saltwater crocodiles isn't such a good idea.

Indopacific crocodile is much better since it describes where the animal lives, but this name is not widely accepted so there is no point using a name no one likes.

Finally there is the Estuarine crocodile. This is a bit more accurate than saltwater since it narrows it down to frequented areas. In the end estuarine crocodile is probably the best name for them.

Well that and salty (more on this later)

Salties have large heads with a pair of raised bony ridges running obliquely from their eyes to the center of their snout.

Osteoderms are few and far between on the neck, but uniform throughout the rest of the body.

Coloration is quite variable in this species with juveniles having bright tan colors with black spotting and blotches on the tail more often then not forming bands.

Adults may be anywhere from straight black to a beautiful golden tan. Some retain their black stripes while others lose them.

The snout is robust and long allowing these animals to take down a wide range of prey items.

Crocodylus porosus is the largest of the three titan crocs. The other two are the Nile crocodile and the the Mugger.

These crocodiles are huge animals growing to lengths of up to 7 meters. There have even been reports of individuals reaching 9 meters, although one must note that these other observations are usually exaggerations and in any case these individuals would be rarities. Today your average male salty will reach a length of 5-6 meters while females usually don't get much larger than 4 meters.

Large individuals will reach weights of up to 11/2 tonnes.

Due to their pelagic nature, these crocodylians have the widest distribution of them all. They have been found throughout the tropical regions of Asia and the Pacific, in the islands of the Indian Ocean, coastal India, Sri Lanka, throughout mainland Southeast Asia, the Indonesian and Philippine islands (populations used to reside on Komodo Island), northern Australia (where they earned the cute nickname of salties), New Guinea up to the Belau Islands and all the way up to Fiji and any small islands inbetween this vast expanse.

If the water's deep enough then these crocs will take it. These animals are not very picky about where they live. Some Australian populations brave the deadly dry season by aestivating in dried up lakes or burrows nearby while others take to the open ocean in search of a new place of residence. It's not unusual to find pelagic barnacles on some individuals. From oceans to mudholes these crocs will take advantage of any and all water sources (a problem that many tourists have no doubt encountered when wanting to take a swim on any beach in north Australia). 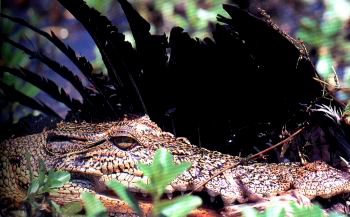 Juveniles make a living off of insects, crustaceans and any other small creatures they can find. Adults on the other hand have a much wider selection. Prey varies from small snakes and birds to Kangaroos and water buffalo. With over a tonne of weight on it's side, Crocodylus porosus can easily hold it's own with such huge animals. In Australia, problems arose when their domestic pigs went feral and took off across the land. The welcome wasn't all that warm though for these animals were the perfect size for the mid to large salties in the area (and hence a favorite prey item)

A large adult will spend it's time lazily patroling it's section of river keeping an eye on the shore waiting for a hungry animal to come by.

When said animal does show up (let's say a wild boar), the croc positions itself ever so carefully as close as possible to the animal without being noticed.

How close can it get?

Well a 5 meter individual can hide itself in less than 1 meter of water without giving itself away. 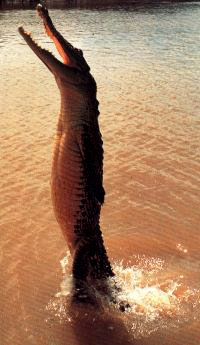 After getting as close as possible to it's prey, the croc sets up for the strike. It's positions it's tail so as for a quick spring. The forelimbs are often weightless and sometimes the croc assumes a bipedal stance underwater. This is because all the power is going to come from the hindlimbs and tail. The forelimbs are for bracing upon impact or for extra acceleration in the event of a miss.

Now the croc waits for the right moment to strike.

Interestingly enough, crocs on average seem to attack drinking animals just as they are prepared to leave. It's not sure whether or not this is due to the animal realizing something's wrong at the last minute or if crocs prefer it this way (perhaps they like a challenge?)

Upon the strike, the croc is launched out of the water onto land and into it's prey, snapping it's jaws shut and breaking any bones of it's prey along the way.

As soon as the croc grabs on, it immediately reverses direction and drags it's hapless victim into the water in an attempt to drown it. With the boar scenario all the croc really has to do is grab on in order to finish the job, but this would be more imperitive with an animal as big as a water buffalo.

After killing the animal the croc tears it up with either a couple nasty shakes or a deathroll or two.

Large males will establish and control large stretches of river. Bellowing for females might occur, but a more olfactory means of attracting females seems to be the case with these guys. While females have a more leeway in terms of territory (they are usually allowed into male territory) males risk severe injury if they dare challenge another for mating rights. Large croc battles are fast and furious with lost tail and jaw chunks not being uncommon.

Afterwards the male and female will get together. She will show her submissiveness by raising her jaw and exposing her throat to him. Then he will come on top of her and they will submerge and mating will occur.

When the female has finished mating she will go off to find a suitable nest site. Unlike Niles and gharials, Crocodylus porosus is a mound nester like the alligatoroids. During the wet season the female will choose a suitable site on the shore and begin building a mound of vegetation. When that is done she will dig a hole in the center and place her 60-80 eggs in it and then cover them up. After that she will stand guard over her babies during the 3 month incubation period, attacking any animal that dares to mess with her eggs (including any inquisitive crocs).

When the eggs hatch (and even before) they begin calling to their mother using ultrasound. She comes up from the water and begins to dig them out. This can be a tedious process seeing as how crocodilians aren't exactly built for burrowing. When she finds the eggs she will either let the eggs hatch and watch the babies head to the water or she will actively take them in her mouth and carefully crack them open and take her young to the water in her mouth.

As the neonates grow up they spend much of their time with mom and eachother. After they leave their ever vigilant parent (all croc babies seem to voluntarily leave their parents. The adults never seem to pressure them into leaving) the juveniles will spend their days in weedy areas of the lakes and rivers where birds and snakes would have trouble getting at them. There they will stay until they get big enough to move out on their own (usually around 1 meter). They will then become more solitary and have a limited social interaction with others (mind you much of this social interaction will depend on the population and area with places rich in food favoring a more social croc society).

This is a strange behaviour that has been observed only once, but was so unique that it was worthy of putting in here. Back in 1996 Phil Cook was enjoying a walk on a beach in Queensland Australia when he noticed a 3 meter C.porosus several meters away. The croc was seen swimming into the surf and then riding the waves back to shore. At first the croc was not happy to see Mr.Cook and gaped it's mouth at him, but after a bit it went back to the waves. This continued for some time and Mr.Cook was lucky enough to have his camera with him at the time and was able to take a few snaps of this strange behaviour.

And here we thought all this time that surfing was reserved for Californians and sea lions :)

Being the largest reptile and the most widely distributed crocodylian has some perks. For one you also get to be the most dangerous. A 7 meter croc can eat a human as many unwary people have found out. During the 30's the hunting of salties in Australia and other Indopacific places had depleted their populations so much that they quickly became endangered. Now with new laws protecting these animals they have made a dramatic comeback (much like the one that the American alligator made).

People venturing into salty territory should be aware of this. While many of the crocs today have grown to fear humans, the thought of a 2 meter biped voluntarily wading into it's feeding grounds might be too tempting to pass up. Things to remember. 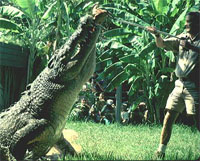 While most estuarine crocodiles are renowned for a bad disposition, there has been one amazing exception. Gomek a 5 meter long salty from the St. Augustine Alligator Farm in Florida was a puppy dog in disguise. For 8 years he wowed spectators with both his amazing nutria tossing abilities and his even more amazing tolerance of people. Feeders of the large croc were allowed to go into the enclosure and get as close as 1 meter from the large animal (a normally suicidal proximity) without any fear of attack. While feeders still used long tongs to feed Gomek, he was generally considered to be a "tame" crocodile and was the favorite of the Alligator farm and people around the nation. Then in March of 1997 Gomek died from heart failure. It was truly a sad day as the largest and tamest crocodile in existence passed away. Since then a memorial has been put up for Gomek at the farm and the owners are looking for another large salty to take his place. Although no other croc could truly replace Gomek; the crocodile that helped change the views of so many people. He will be missed.