The Indian Mugger Crocodile is one of what I call the 3 titan crocs. These also include the Nile croc (C.niloticus) and the Indopacific croc (C.porosus). These three crocodiles are the most known of the bunch and the largest.

Now the Indian Mugger is known by two names. The Mugger crocodile and the Marsh crocodile. Technically I suppose marsh croc is more correct than mugger, but I seem to enjoy the name mugger better (even though I'm at a loss as to why it's called that)

Juvenile muggers are a light tan or brown and have dark crossbands on the tail and body. As they mature into adults they become gray to brown and usually end up losing their crossbands. These animals have broad and heavy snouts along with normal dorsal armor. 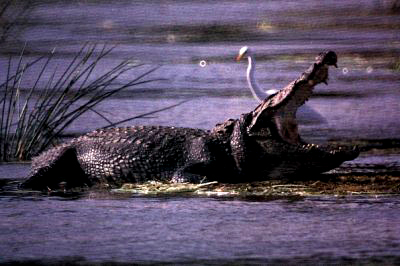 Muggers live all over the Indian subcontinent from eastern Iran, Pakistan, northern India and Nepal. They are also found south of the Himalayas near Bangladesh and south to Sri Lanka

These are mostly freshwater crocs (although they have been sighted in brackish water) that prefer rivers, lakes, artificial water tanks, reservoirs, and irrigation systems.

Hatchlings make a living off of insects and crustaceans, while juveniles prefer fish and small vertebrates. Medium sized adults will eat frogs, lizards, birds and small mammals and large adults will take down deer and buffalo species. Muggers are also known for stealing fish from nets. Something that doesn't make them welcome to fisherman.

Muggers are ambushers and stake out river banks where large mammals are known to frequent. When said mammal comes down to drink the mugger is quick to take up a position upon which it may strike out and seize it's prey. Adult muggers are large animals weighing in at at least 1,000 lbs and have no trouble holding down a large deer or buffalo. When the animal is in position it waits for just the right moment and then it strikes. Surging onto land with jaws agape and ready to snap shut the mugger is quick to grab it's prey. Once grabbed (usually on the muzzle or foreleg) the animal is brought underwater where it soons drowns. Afterwards the mugger will begin eating the animal.

Now many large crocodylian species are known to hunt and feed together in groups so it is not uncommon to see a pack of C.palustris cooperating to take down a large animal and then dismember it.

As far as small animals go, muggers will grab what they can when they can. Adults have been seen sweeping their large heads through the water to grab little fish. Tail walking has also been observed in muggers as they grab low flying birds. Smaller animals are probably taken as they swim across the river or lake.

Land hunting is uncommon for any crocodylian, but is known to occasionally happen. This is usually for small or wounded animals though.

Male muggers mature at about 2.75 meters (8 feet) with females being a bit smaller.

During courtship time males will cruise the perimeter of their territory with their back and tail out of the water to show dominance. This is also followed by jaw slaps (a common crocodylian call sign) which is used to warn males and (more importantly) guide females to his territory. When a female finds the male it is up to her to let him know that she is ready to breed. She does this by rubbing her snout on him and circling around him. Sometimes even mounting him. The male will then follow up with underwater bubble blowing underneath the female to assure her readiness. If she agrees he will mount her and they will begin copulating on the surface before submerging for 10-15 minutes.

Afterwards the female will stake out her claim on the riverbank for best nest site. She will rigorously defend this site from other females and males that get too close. 40 days later she is ready to lay her eggs. Now Muggers are hole nesters and do not build mounds like alligators do. The female will dig many trial holes in search of the ones with the best spot on the river and best overall temperature. When the temperature is around 800 - 820 F she will dig her true nest. This hole will be L shaped and reach as far down as her hindlegs can go. There she will deposit between 25-35 (although there have been reports of as many as 46) eggs in the hole. All the while she will be in that trademark trance that female reptiles seem to get in during egg laying. These trances are so deep that researchers can actually come up and pet the female without her caring.

When all the eggs have been laid the female then must cover them up once more. This part is long and tedious sometimes taking up to an hour or more as the female first covers and then camouflages the nest.

For the next 2 months the female will stand guard over the nest ready to attack any intruders into her territory. 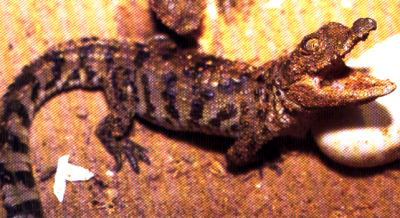 When hatching time comes around the female and the male will begin to excavate the nest during hatching time as the babies begin their ultrasonic chirping. After the nest is dug up both parents will then take the young and any unhatched eggs into their mouths. The already born young will stay in the throat pouch located under the lower jaw. The unhatched young will be carefully opened up by their parent's jaws. Afterwards the parents will take their young down to the nursery pools where they will be guarded for up to two years by one or both parents.

Interestingly enough the paternal instincts in male muggers are so well developed that some males have been known to claim exclusive rights to hatching the nest, which means that he will even chase away the mother.

Baby muggers have a pretty sweet life (well as sweet as life can get for young crocs). Along with being guarded for the first two years of life, these crocodiles will grow up in an extremely sociable environment. After they leave their parents the young will group together and form their own little mincommunities in the adults territory. There they will grow up into large strapping individuals that may one day group together to take down a large buffalo that has come down to drink.

As part of the 3 titans, muggers are large enough and have the ability to take down a human being. This does in fact happen, but is usually rare. Except in areas that are poor and the people must make a life fishing at which point they are in mugger territory.

Still an occasional human death is nothing compared to how many animals have been slaughtered for their skins, meat and eggs. Poachers are known to wait by a females nest until she spots them and chases after them at which point they shoot the poor creature, taking her and her eggs.

If anything this section should be renamed: Human dangers to crocodiles :(

Back to the Crocodylids
Home