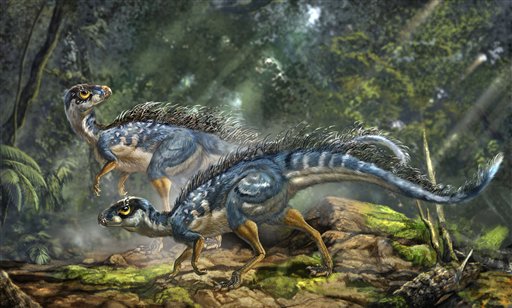 Apologies to all for the delay between blog posts. It seems I really should avoid putting deadlines on these things, as every time I do so, something in real life pops up to divert my attention.

I have since had the chance to examine the Tianyulong confiusci paper thoroughly. My initial trepidations about the fossil remain. Tianyulong is a very important find…if what it preserves is real?

As I sat to write this post up, I watched as the pages piled up. Because of the unexpected length of the post, I decided to break this evaluation into two, or three parts (likely three, but I’m covering my bases just in case). This first part has little to do with T.confiusci, and is mostly a primer for what’s to come. Tune in tomorrow for the meat of this post.

In the interim between blog posts, Time.com has published an article on the Tianyu museum in Pingyi China (home to T. confiusci). This natural history museum has quite possibly the largest collection of fossils in the world. Their dinosaur hall alone features some 480 fossils randomly on display. The issue is just how authentic they all are.

Tianyu has purchased most of its fossil collection from individuals an illegal practice permitted by authorities only because it is technically a state-owned institution. More problematic, however, is that there is no way of knowing how many of those fossils are real. Chinese scientists say fake fossils are so pervasive in Chinese museums that using authenticity as the basis for judging a collection’s worth is unrealistic.

This has been a rampant problem in China for some time now (~10 years at least). While here in the states, paleontologists have to worry about the locality in which a fossil bought at a shop, or auction, was collected (both for legal purposes, as well as scientific documentation); fossils in China also bear the burden of possibly being faked. Fossil poachers in China know what types of fossils are preferred (“feathered” dinosaurs in particular), and have gotten very good and making fakes. So good in fact, that a thorough vetting of any major find in China should really be done. Some authors have already started inventing techniques for doing just that (Rowe et al 2001, Mateus et al 2008).

Sadly a thorough vetting process remains the exception, not the rule for Chinese fossils. Only two major dinosaur finds have been authenticity tested. The first was the seminal “feathered dinosaur”: Sinosauropteryx prima (Chen et al 1998). The second was NGMC-91; otherwise referred to as “Dave” (Ji et al 2001). This specimen is believed to be a member of another “feathered dinosaur:” Sinornithosaurus milleni.

Technically there was one more specimen that has received authenticity testing, but I’ll get to that in a bit.

It really seemed that once Sinosauropteryx was found to be authentic, many of the other “feathered” finds were given a free ride. Within a year’s time four separate “feathered” dinosaurs were published in Nature. There was the therizinosaur Beipiaosaurus inexpectus (Xu et al 1999a), along with Caudipteryx zoui, Protarchaeopteryx robusta (Ji et al 1998) and the dromaeosaur Sinornithosaurus milleni(Xu et al 1999b). All were preserved with variations of what seemed like “feathers” (generally referred to as protofeathers now). None appeared to have been given an authenticity test, and were (for the most part) presumed to be the real thing. Protofeathers became something to be expected from Liaoning province. If someone posted a news article about a dinosaur fossil from the Yixian formation, it was practically a given that the animal would have protofeathers of some sort.

Then, in November of 1999, National Geographic reported on the discovery of yet another “feathered dinosaur” coined: Archaeoraptor liaoningensis (Sloan 1999) The animal was found with the true feathered wings of a bird, along with a feathered dromaeosaurid legs and tail. Though informally published by National Geographic (who had jumped the gun on the story), it was nonetheless accepted by the paleo community.

As the weeks passed, the validity of Archaeoraptor started to get called into question. The specimen itself consisted of numerous slabs that were glued together. This was suspicious, but not surprising given that the shale of the Yixian is weak. There were some mentions of it being a chimera (one leg was apparently longer than another), but regardless, it was generally believed to be the real deal (I even had a chance to ask one of the paleontologists working with it, Phil Currie, about it’s validity, and he felt it was genuine).

Finally, after thorough examination, it was found that “Archaeoraptor liaoningensis” was indeed a fake. The animal was a chimera composed of a bird (front half), the feathered dromaeosaurid Microraptor gui, and a third, unnamed animal. Alas, despite the apologetic retraction from National Geographic, the damage was done. The Archaeoraptor hoax was well publicized around the internet. In particular, on the websites of creationists who toted it as the newest Piltdown man (the fact that both Piltdown and Archaeoraptor were found to be hoaxes through the use of science [Rowe et al 2001], seems to be a fact that is lost by creationists).

Archaeoraptor stood as a cautionary example of why a thorough vetting process should be undertaken for important Chinese discoveries. Especially if they come from the remarkable shales of the Yixian formation.

Now, 10 years later, the Yixian continues to pump out new and amazing finds. Unfortunately, it also continues to pump out numerous forgeries; many of which are very well done. Despite what happened with Archaeoraptor, there is still a distinctive lack of authenticity testing going on for these fossils. So there remains a good chance that some of these “feathery” finds are not what they appear to be.

Tune in tomorrow for the analysis.

2 Responses to A critical evaluation of Tianyulong confiusci – part 1