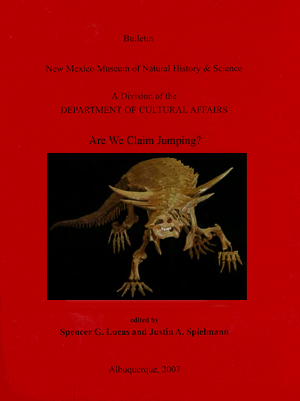 To kick off day two of this 30 day romp, I thought it would be pertinent to write about the whole NM aetosaur “who named what, first” drama. For those who haven’t been following what’s been going on; Nature ran a news article a few days ago that brought to light the apparent seedy practices going on at the New Mexico Museum of Natural History and Science. Though Nature’s article only recently brought this to the public’s attention, this practice had been known of and talked about for almost 2 years now.Paleontologist, Mike Taylor, along with grad student Jeff Martz of Texas Tech, and William Parker of Petrified National Forest, Arizona, have found themselves at the heart of a drama they never intended to get in. As documented on his site, the folks at the NMMNHS (in particular: Dr. Spencer Lucas), have apparently been stealing the hard earned work of others, in an effort to pad their own resumes. It has been mentioned (anecdotally) that Dr. Lucas had made a personal goal of publishing more papers than Edward Drinker Cope (who currently holds “the record” at 1200). In my mind, this is an honorable goal to reach for, but if it means cutting corners and releasing work that is either not publish worthy, or outright stolen, then it seems to defeat the purpose. In science, quantity of published work is a distant second to its quality.

So, did Lucas and company do this on purpose, or was this just a glaring oversight on their part? Were they just being overzealous? To date, that question remains unanswered. Still, it is telling that Lucas and co have yet to respond to Mike, Jeff, Bill, Matt or Darren. The only official response has been from the first (and currently only) mass media mention of this (one has to sit through a quick commercial to read the article). In the article, Lucas denies any wrongdoing.

Even more disturbing, especially in terms of future ramifications, is the fact that Spencer Lucas is one of the editors on the NMMNHS bulletin; a forum that he uses a lot to publish his findings. In the land of academia, this is a big no no. By submitting official technical papers to a journal that he has some (if not all) content control of, Lucas is able to bypass a portion of the peer review process (basically, the final say on whether or not a paper gets published at all), and pump papers out way faster than average. That isn’t to say that Spencer Lucas and his colleagues at the NMMNHS are using the bulletin for this purpose. This investigation is still in its infancy, so I’m reserving final judgment until then.

That said, all the accumulated evidence so far (including anecdotal statement from folks who have worked around Dr. Lucas) seems pretty damning. At the very least, it looks to make the NMMNHS bulletin no longer a peer reviewed (and thus respectable) body of work.

There is not much more that I can add here that hasn’t been documented far better on Mike Taylor’s, or Darren Naish’s respective websites.

What I will say, is that having spent a fair amount of time in the state of New Mexico, I am not surprised to see that Mike and co. are having as rough a time as they are in trying to seek retribution. New Mexico bureaucrats have a tendency to “protect their own.” If one is a local, or close enough to it (i.e. one has lived their for 10 years, or more, and has established a good reputation with the locals), then one is given free rein to do whatever the heck one feels like, without worry of getting caught. This has allowed many folks to get away with everything from bribing local food inspectors, hiring illegal immigrants, dealing drugs out of the back of the local convenience store and so forth. 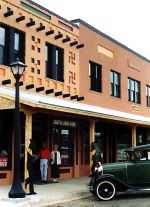 The Shaffer Hotel. Once owned by a lady whose blatant mishandling of money resulted in the IRS taking the property away. She was later given a job at one of the local banks!
It doesn’t help that the state is fairly desperate for attention. Having the chance to boast about having a scientist who has published the most papers of any other scientists in the world, or housing a bulletin that sees the largest growth in published work of any other journal in the country, is just the kind of thing that would cause folks in the political arena to overlook the ethical ramifications, in favour of bragging rights. After all, these are the same people who gave us the Albuquerque Isotopes.

Finally, I find it disappointing that in a year’s time, aetosaurs, which were these awesome crurotarsan beasts, will now be known mostly for this whole debacle.

Maybe someone can do a documentary about these guys, to help with their PR.