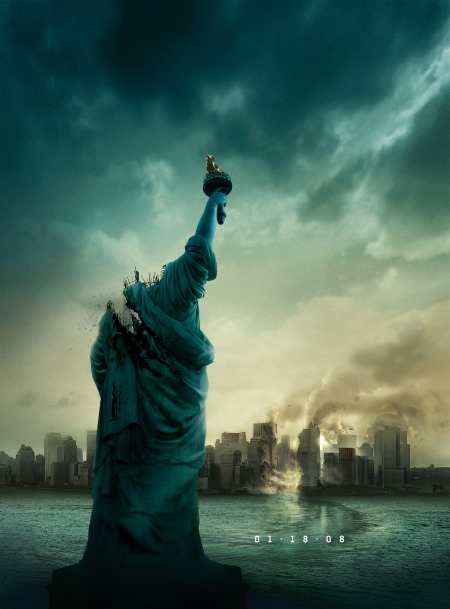 So did it live up to the hype? In my opinion: yes.

Early on during the marketing for the film, there was some worry that this might wind up like Snakes on a Plane and just end up biting its own tail. Thankfully that never happened.

The goal for this review is to keep things spoiler free. Part of the fun of Cloverfield is in maintaining the mystery. With that said, let’s see what I can report.

For starters, this is the only film I’ve been to that had a warning placed in the theatre. The warning stated that due to the nature of the cinematography, there was a chance that people could suffer motion sickness. The movie folks aren’t kidding either. There was a lot of shaky cam in this film. Some of the shakes in the beginning came off very fake (it’s like they gave the camera to a monkey. Perhaps a drunk monkey). Those were by far the worst. After that, the cinematography became a lot more realistic and tolerable. Thankfully this film runs only 80 minutes long, so one does not have to require a stomach of steel to make it through. Which is not to say that I ever felt sick during the film (unsettled at times, but never sick). Then again, I can play first person shooters with no problem too; so there.

I had no complaints with the actors. They played their parts well. No one was really memorable, but then they weren’t the “star” of the film anyway, so it didn’t really matter. J.J. Abrams and his crew made a point of keeping the witty one liners down to a minimum. While some people might argue the believability of the choices that some of the characters made, I didn’t really see the main characters do anything that I wouldn’t have done in that same situation. Cloverfield also had some of the most realistic military I’d ever seen in a giant monster movie (not a high bar, I know). The military personnel actively tried to help people, and never tried to stifle information about the monster, or what their plans were. That was a nice change of pace from the more X-Files centric view that tends to pervade these movies.

So what of the crux of the film? How did the “star” pan out?

I have to say; I really enjoyed the look and feel of this monster. I don’t want to give away what it looked like, but I will say that Cthulhu fans and Silent Hill fans should be pleased. The beast gave off a menacing, surreal aura, whilst emitting these haunting sounds as it moved about. This gave it a nice creepy presence that I have never felt with any other giant monster before.

As for the shooting style, it’s a mixed bag for me. I like the approach that J.J. Abrams took with this film. That said, I don’t enjoy shaky cam “doc-style” at all. I find it annoying, and I believe it takes one out of the film because it makes a point of telling the audience that there is a camera man there. For Cloverfield, though, these complaints were moot. We know that there is a camera man in this film, so the “doc-style” made perfect sense. This was one of the very few times where I have found the shaky cam to actually add to the immersion of the film. Another plus to this style was that it forced all the special effects to be almost entirely background based. That is to say, there were very few set-up shots for the CG. This, in my opinion, made the effects all the more realistic. There were no scenes of people running to designated spots to look up at a creature that they knew was going to be drawn in later. Instead, we saw people going bat-shit crazy and the effects artists, having to subtly insert their effects within these sloppy camera sweeps. By doing this, the effects meshed with the film much better, and added to the sense of immersion. Two scenes particular really showed this off. One was on the Brooklyn bridge, while the other was on the street with the military. There was also a very memorable scene in the subways that not only felt real, but was genuinely creepy.

As for complaints, I really don’t have much. Folks who are used to the classic storytelling formula will not be happy with how this film wraps up. The writers leave a lot of the film to audience imagination. I liked this approach. One of the problems with many of the movies out these days (especially in the action/horror/thriller genre) is that they explain too much. I hate it when movies talk down to me. Cloverfield never talked down to me. That isn’t to say that there weren’t some predictable moments in the film (e.g. the helicopter scene, or the nightvision scene), it’s just that the film never took a moment to pull me aside and explain the obvious. It never pulled out that one narrative tool that is almost always used…badly. You know the tool. The really annoying one that always feels out of place because so few writers can do it right.

What was it again?

This was a film that was devoid of almost any exposition. There was a lot that was never explained. This was a good thing! There was no explanation behind the origin of this critter. There were no points in time when the military sat folks down to explain what they knew about it. For that, I am thankful. By not explaining as much as they did (or is that: didn’t?), one was forced to put much of the backstory together with one’s imagination.

As strange as it sounds, this was a monster movie that might actually stimulate one’s brain. How neat is that?

Now there were moments that almost took me out of the film. For starters, the story is told through a single camera. This camera is an amazing – near magical – piece of engineering. It got the crap beat out of it, and still it ran fine. Dust and debris had no effect on the sensors and the battery was stellar. This battery kept going throughout the entire film with nary a stutter. Besides the camera, I also had to work a bit to maintain my disbelief when it came to the cast of characters. It was genuinely hard to believe that a group of hapless folks stuck in Manhattan could run into so many close calls with a multi-story beast running amok. It would have been nice if the filmmakers decided to incorporate multiple videos scattered throughout Manhattan instead of relying on this single video. Then there was the scene involving a dangerously placed piece of rebar and the remarkable healing ability of one character. Finally, there was the opening scene. I get that the filmmakers needed to establish a sense of where we were, but the party scene went on for too long. Most of the folks one saw were extras, and even the main characters didn’t really matter much (they mostly just served to keep us grounded in the story).

Short of these minor flaws, the movie was all that I had hoped it would be.

So now we are left with the final question. Did J.J. Abrams and co. succeed in their attempt to revitalize the giant monster movie genre?

I suppose that only the box office results will truly tell. In my opinion, though, it does. For the first time ever, we are given a “victim’s” point of view of what it would be like when a giant monster attacks. Forcing the effects team to work within the confines of a handycam was a brilliant choice, as it resulted in a much more realistic presentation of the CGI. I’m hoping other movie makers take note of this fact, and incorporate more subtle CG into their films, rather than the current gaudy style we’ve been seeing.

Though it will never shake comparisons with Blair Witch, Cloverfield is nonetheless a successfully fresh new take on how to do a monster movie. I highly recommend this film to monster movie fans, horror fans and thriller fans alike. I also recommend it to anyone who enjoys it when movies shake up the tried and true blockbuster formula.

Enough of my babbling, go see it.