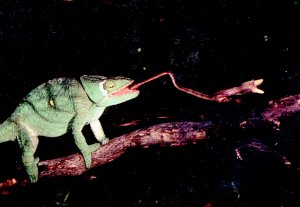 Chameleon tongues are extremely fast and long. They can be anywhere from one to 11/2 times the bodylength of the owner and can rocket in and out with blinding speed. A 51/2" tongue reaches full extension in 1/16th of a second, which is fast enough to snatch a fly in midair. It works like this: A "U" shaped hyoid bone anchors the tongue to the back of the mouth. The same musculature that humans have, is used to move the tongue in the mouth and swallow. But chameleon evolution has added to the arsenal of lingual tricks.

The hollow tongue sheathes over a long, tapering cartilaginous spike called the hyoid horn. The horn attaches to the center of the hyoid bone. The tongue consists of three primary components: The sticky tip, the retractor muscles and the accelerator muscles. (musculus accelerator linguae). When at rest, the whole assembly sits at the bottom of the mouth, the base placed down in the throat behind the head. Before striking, the lizard moves it toward the front of the mouth and muscles raise the hyoid bone above the lower jaw. After aiming with the entire head, the chameleon is ready to fire.

The accelerator muscles are essentially sphincters. These rings of muscle squeeze against the hyoid horn. Because the horn tapers toward the tip, the muscles drive the entire tongue out of the mouth. Lubricated cavities between the muscles and the bone reduce friction so the tongue can fly with greater speed. The effect is the same as squeezing a watermelon seed to make it fly, except in this case the seed remains stationary and the sqeezer is propelled into space.

After firing, the tongue is on it's own. The only thing left for the lizard to do is change the length of the strike. A tendon attaches to the tip of the hyoid horn. This and other tendons stop the tongue in flight, shielding the delicate musculature from the shock. 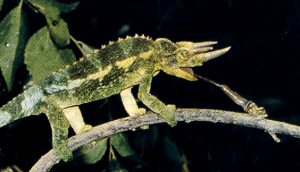 The tip of the tongue resembles a club. Covered with a sticky saliva, it's abrasive surface also grips, High speed photographs of the tongue in flight reveal a flap of skin trailing the head of the club. The flaps wrap partially around the prey on impact. Wet worms or slugs, however frustrate the system because the saliva won't adhere to their slimy surface.

The glossohyal (retractor) muscles fold around the hyoid horn like a compressed accordion. When the tongue extends, the elastic retractors stretch smoothly to the tip of the horn. Then after a hit or a miss, the muscle contracts, bringing the rest of the tongue with it. The tongue can pull in about half of the chameleon's body weight. Because speed is less important for reeling in prey, than catching it, the retractors don't exhibit the speed of the accelerator muscles. Most of the time the tongue collapses and recoils on the way back, like a strand of spaghetti being sucked in.