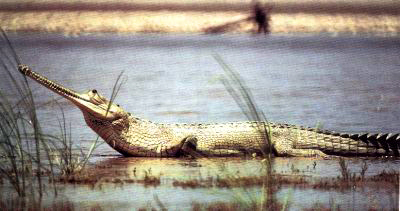 The GAVIALIDAE consists of only one living species, Gavialis gangeticus or the Indian Gharial. Gavialoids are the most specialized of all crocodylians. They have extremely slender snouts that are used for catching fish in fast moving waters. In fact gavialoids have adapted so well to their fish catching existence that the forelimbs of adults are actually too weak to hold the animals up. Almost their entire life is spent in the water. Now in most crocodylians the fourth tooth of the lower jaw is the main defining characteristic. It's either in a pit in the upper jaw or a groove outside the upper jaw, but gavialines are different. All of their teeth are the same size and they all interlock. This makes for a very effective fish and small animal trap.

Gavialis gangeticus is known by two names, the Indian Gavial and the Indian Gharial. Both are correct, the only difference is that the name Gharial is named after the strange bulbous protruberance that mature males get, called gharas.

Gharials are long and slender animals. They have a light olive tan coloring with oblique dark blotches or bands running down the body and tail. Their feet are extensively webbed, and their weak limbs keep them from making the extensive overland journeys of their fellow crocodylians. 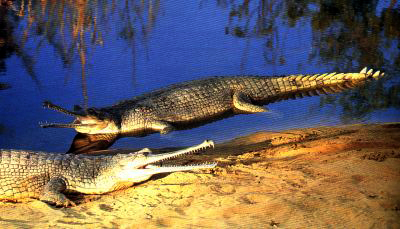 Now gavialoids might look to be pretty weak and small, but they can actually grow to lengths of 7 meters (23 ft) which makes them very huge. There large size and the false belief that gharials were man eaters has caused the death of many a gharial and they are now highly endangered animals.

Gavialoids with their long slender snouts and long slender bodies have specialized themselves to become giant fish nets. Fish make up the bulk of most gharial diets. Their are occasions where land animals like a little lizard or mammal are found in adults stomachs, but it is rare. Another thing that has been found in gharial stomachs are human artifacts. These were once used as proof that gharials were man eaters (how someone can think that an animal with a snout thinner than a person's arm is a maneater I'll never know), but it later was shown that the gharials would just end up ingesting old artifacts that were part of cremated bodies that were floating downriver (a custom on the Ganges). These were probably used in place of the rocks that gharials and other crocodylians swallow to help them digest and (maybe) keep buoyancy in the water.

As stated before gharials are specialized for fishing and fishing they do. A gharial will either hang out near fast moving water with it's jaws open waiting for the faint feel of a fish, or actively swim around looking for them underwater. With their equal sized needle sharp teeth all the gharial has to do is find it's prey and either snap it's jaws shut or swish it's head back and forth with it's jaws open just enough to spear the fish.

Large animals can't be taken so ambush hunting the big stuff is out of the question. They can leave that to the muggers (Crocodylus palustris)

Small animals might be taken as they swim across the river, but it is unlikely.

Gavialis gangeticus lives in the northern part of the Indian subcontinent. It can be found in the Brahmaputra, Irrawaddy, Bhima, Ganges, Mahanadi, and Kaladan river drainages of Pakistan, India, Nepal, Bangladesh, Bhutan, and Burma.

Gharials, being the specialized fishers that they are, live only in rivers.

Female gharials are sexually mature at about 2.75 to 3 meters (8-9ft) and males are mature at about 4 meters (13ft). When a male gharial reaches this size he begins developing that distinctive ghara on his nose. This cartilaginous growth eventually forms a lid on the nostrils that flaps when the male exhales, making a very audible buzzing noise. Other than buzzing, gharials participate in hissing and weak above water jaw slapping. Underwater both sexes produce an underwater jaw slap that, along with subsonics, attracts possible mates, while warning interlopers to stay away.

When a female runs into a male they begin rubbing each other with their snouts and the male will follow the female around the territory until the time is right. The female will signal her willingness to mate by raising her head skyward (a common crocodylian submissive gesture) at which point the male will hop on and the two will submerge. Sometimes for up to 30 minutes.

After mating the female will find a nice steep sandy bank with which to dig her nest. Unlike the mound digging alligators, gharials are hole nesters. A female will come out of the water and begin digging a hole in the bank. She may make several false or trial holes before deciding on the perfect spot. Her hole will be about 50 centimeters (20 inches) deep and around 3-5 meters (10-16ft) from the water. There she will deposit her eggs (preferably by night) which range from around 35-60 in a single clutch. Afterwards she will cover the nest up and stand guard over it for the 60-80 day incubation period. By day she will stay in the water, but she will repeatedly come up to the nest at night. Even thought gharials are awkward on land, a female guarding her nest is not to be messed with. 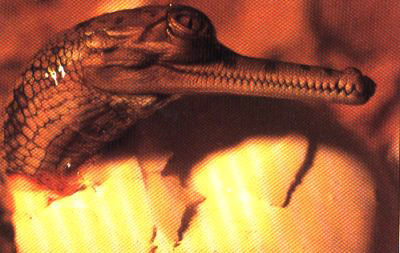 When the eggs hatch the female will dig up the nest and help the young back into the water. Unlike most crocodylians which have an extendable throat pouch that is used during nesting time, gharials lack this due to their thin jaws, so they are unable to pick their babies up and take them to the water. The babies must do that part themselves, all under their mother's watchful eye. Once in the water the babies will hang around their mother and sometimes their father for several weeks to several months. It seems that it is up to the babies to decide when to leave. The parents don't seem to mind either way.

Ha, I can't help but laugh at the many people who are actually afraid of being taken by these animals. Even though they can grow to 23ft lengths, the most damage you can get is a broken bone from a well placed tail swipe. Maybe some little gashes from a daring individual that attempts to bite you, but no more.

As stated before gharials are unable to swallow large animals, much less take them down. Their jaws would literally snap under the stress.

So does this mean that gharials are not dangerous at all. Course not. A female who's nest is being invaded will show you just how dangerous these animals can be. But for the most part a gharial won't attempt to attack a person. Of course if you start throwing rocks at the animal or teasing it or if your one of those people who throws coins at the gharials at the Bronx Zoo then I can't blame the gharial for maybe hitting you or biting you (as rare as that may be). A calm gharial is no threat to anyone. In fact 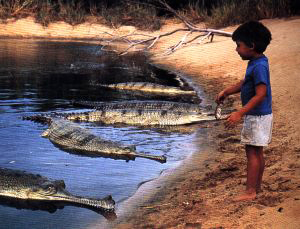 
Back to the Beginning
Home