The American Alligator is by far the most commonly talked about crocodylian. They are the ones that everyone usually associates with a crocodile.

These are the largest of the alligatorines and used to measure 5.5 to 6 meters (about 18-20 ft) although due to overhunting and habitat loss a 15 ft (4.5 meter) animal is now considered large.

The coloring of hatchlings and juveniles is usually black with 10-11 narrow yellow or tan crossbands on the tail and about 4-5 on the body. As they reach adulthood the crossbands fade and usually are lost (although I must say that an adult American Alligator with crossbands is a beautiful sight to see). The eyes have a silverish to black color to them, which makes them look like they have doll eyes. Their snouts are large and wide with a bony nasal bridge. This is of course a generalization and individuals may have different patternings, snout shapes and arrangement of osteoderms (bony plates/dermal armor).

As the name states the American Alligator is just that and American They range from the border area of Virginia and North Carolina south through southern Florida and west to the Rio Grande in eastern Texas. It follows the Mississippi River drainage north to southern Arkansas and McCurtain County, Oklahoma. Interestingly, human alteration of habitat in Texas is actually increasing it's range in that area. It seems that A.mississippiensis likes to wallow in cattle holes, much to the shock of some unknown cow and rancher.

The American Alligator is generally a palustrine crocodylian. That is it favors marshy freshwater habitats, such as marshes, swamps, rivers, and lakes. Of course there are exceptions and these animals have been spotted living in tidal areas and even (rarely) in the ocean. That last habitat is worth doing research on since alligator osmoregulation (removing salt) is not that well developed and gators that are exposed to highly saline environments usually end up dying. If there are alligators that live near and in the ocean this might indicate a new species or subspecies.

As it's large robust snout indicates, American alligators aren't too picky about what they eat. Their diet changes as they get bigger. A hatchling will make a living off of insects and small vertebrates, while a juvenile will have a diet consisting of fish, crustaceans, and small mammals. Finally adults will eat, snakes, large fish, large mammals (i.e. cows and calves) turtles, birds, and clowns....um well maybe not the last one :)

One of the most amazing things I've seen is just how strong an alligator's jaws are. I've seen an adult crunch through a large freshwater turtle shell. Very amazing animals. 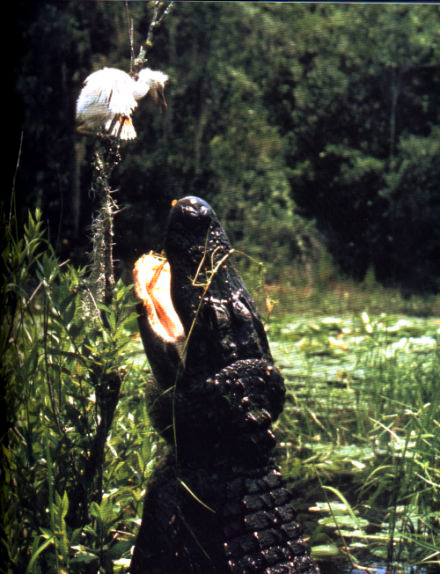 American alligators are ambush hunters. Now that doesn't mean that they will just sit in one spot and wait for something to come along. No nothing like that. Alligators have territories, which are certain stretches of river. On that river the animals will patrol the shores and keep their eyes open for potential prey. If some deer should come around for a drink, the alligator will submerge and head closer to the animal. When it gets within striking distance the alligator will then lunge out of the water and snap it's jaws on any available bodypart (since it's the water, that available bodypart is usually the snout) sometimes breaking the prey animal's bones in the process. Now the alligator will proceed to drag the animal into the water and drown it. American alligators are tough customers and large ones can easily tackle and hold down deer and even cattle.

Now that's for big prey. Smaller prey doesn't require so much ambush strategy. If an alligator is underwater and spots a good size fish it will chase the fish underwater and grab it, kill it, and eat it right then and there. Smaller animals can be taken too. Now a smaller animal is much harder to catch than a larger one. Why? Because smaller animals are a lot quicker, more agile and way more wary. So alligators generally grab small animals like the beaver sized rodents known as nutria, when they are swimming across the stream or taking a bath.

Alligators can also grab birds as the picture shows. An alligator can grab a low flying bird by jumping and even tail walking out of the water and snatching it in it's jaws. In some cases it's easy to grab a bird like a heron. These birds have huge wingspans and a slow takeoff time, so if an alligator is close enough CHOMP!

Of all the crocodylians the American alligator has been studied the most. So many of our information on the lifestyles of other crocodylians is gleamed from this animal including nesting and child rearing.

Animals are sexually mature at about 1.9 meters (6ft). Males begin calling females with loud bellows and roars that can be heard all over the bayous and marshlands. Many of these calls are subsonic and can't be heard by human ears, but they still can be viewed. An adult male will raise his head and neck out of the water and then rapidly contracts his trunk muscles sending a soundwave pulsating from his body so strong that it makes the water bubble around him. This sound travels very far underwater and when listened to up close sounds a lot like distant thunder. Females who hear this will find the male who sent it and then initiate courtship behaviour. They will go up and nudge the male's back and neck. This can last for hours as these animals "fondle" each other with their jaws. Eventually mating begins. Male alligators and crocodylians in general have only one penis instead of the two that is commonly found in the squamates.

After the female becomes pregnant she will seperate herself from the rest of the group and begin making a nest. She does this by coming up to the shore and scratching dirt and vegetation in the immediate vicinity into one area and pat it down with her body to make a large mound. The female then begins to scoop out an egg chamber in the middle of the mound with her hind legs. Once the egg chamber is ready she begins laying her eggs. It is rumoured that a female will catch the eggs with her hind feet as they fall out and then gently place them down. I don't know if there is any truth to this, but the hind feet are capable of such a feat so.... She will lay between 35 and 100 eggs (depending on age and size) each about the size of a goose's. The eggs are creamy white in colour. During the egg laying process the female becomes very quiescent and seems to be in a strange trance. This "trance" has been observed in many other reptiles and is an interesting trait to observe. When she is done the female then covers the eggs up in the mound and lets them incubate themselves for about 2 1/2 months. As the embryos breath they exhale carbon dioxide which, combined with the rotting vegetation, heats the nest and incubates the eggs. Baby alligators and other crocodylians have their sex determined by their incubation temperature. A warmer nest will produce more males than females while a cooler nest will do the exact opposite. 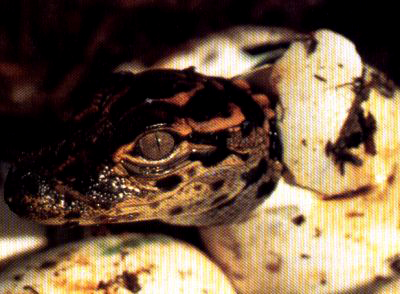 When the 65 days are up the eggs begin hatching. The babies will usually start letting out these ultrasonic chirps that let the mother know that it is time. Interestingly enough it has been shown that unborn hatchlings actually communicate with each other while still in the eggs, via this chirping and actually synchronize their hatching so that it all happens at once. When the female hears her babies chirping she returns to the nest (that she has been guarding from predators the whole time) and uncovers the eggs. Then the babies will either break out of their eggs by themselves using a little sharp protruberance on their snouts called the egg tooth, which breaks off soon after hatching, or the mother will take the eggs into her mouth and actually break them open herself. Crocodylian jaws while strong are also highly sensitive, and a crocodylian can decide on how much force it wants to use on an object. This is how a mom alligator doesn't destroy her babies in the process of opening the eggs. Not only that but the mother will also take any eggs that haven't chirped and shake them to see if they are fertile. Afterwards the babies head to water either by themselves or with the help of mom, who will carry them gently in her jaws via a throat pouch that extends from her lower jaw. The babies are usually places in a special pool called a nursery which is usually isolated from other alligators and full of small animals to eat. Once there the babies begin either swimming about, eating or hanging on mom. Chances are that they won't start feeding for a couple days as they would still be absorbing their egg yolk.

Now we've all heard that baby alligators are little replicas of adults. This is a load of bull. A baby alligator has a huge head with large eyes and a short snout. In other words they have a baby face. 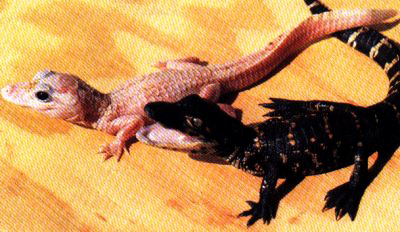 We've also all heard that baby alligators are able to take care of themselves right from birth. This is another load of crap. A baby alligator, while able to catch it's own food, is unable to fend for itself, gets lost easily when mom isn't around and is unable to walk without many jerky, baby, movements. It seems that baby alligators are unable to walk in the "high walk" at that age and instead opt for the sprawled gate. The mother will watch over her young anywhere from six months to two years. During that time the babies will follow her wherever she goes. When she's in the water they will hop on her head to bask, when she's on land they will follow her around like little ducklings following their mothers. This type of caring is not usually talked about with reptiles, but it is much more common then people think.

I'm not sure why I added this in. I guess it's just to let people know that these animals are nowhere near as dangerous as people think they are. It is very rare to get attacked by any alligator. Even a large 15 footer. Now there are occasions where a person is in the wrong place at the wrong time and gets attacked. This wrong place is usually near a nest or hatchlings, or near an animal that is malnourished and desperate. Usually though when a wild alligator spots a human it will go off and hide somewhere. Alligators that have grown up around humans and have been fed by them will become daring and will go up to humans. This isn't usually dangerous and for the most part just ends up freaking out some human.

Most attacks on humans have not been fatal and the injuries usually aren't too great, so there isn't too much to worry about when around an alligator. Just be careful when your in their territory and above all if you find that your camera (that doesn't zoom in) can only get the inside of that big alligator's mouth in your shot, then your probably too close.

And that is that.
Back to the Alligatorids

Back to the Beginning