Even though they are one of the most archaic of the reptilia, crocodylians have many derived traits that occasionally place them closer to mammals and birds, than to other reptiles. They also have a few transitional properties as well.

In living crocodylians there is really one basic body plan. It consists of a long body with four short stout legs (although they really aren't THAT short) a long laterally compressed tail and a skull with a relatively long snout. Throughout their 200+ million year history there have been many many variations on this body plan. There were terrestrial crocs, bipedal crocs and even some possible arboreal crocs. One group, the pristichampsids, had hooves on their feet and chased down their prey. Along with the terrestrial variety, the seas were also home to fully aquatic species. Truly marine mesosuchians such as metriorhynchosaurs, lived in the Jurassic and Cretaceous for a period of time. Regardless of all this variety, the "classical" crocodilian form has always remained and in times of stress, this was the form to always make it through.

The hearts have it

Crocodylians have anatomically divided, four chambered heart. This heart, like those of birds and mammals, allows complete separation of oxygenated and deoxygenated blood. This allows for for two separate pressures to be present in the heart at any one time. A high pressure for the body and a low pressure for the lungs. For most tetrapods this is the "goal" of any heart. It allows for fast circulation throughout the body, thus keeping all cells full of nutrients, while low pressure circulation goes to the lungs so as not to explode the alveoli. In chelonians and lepidosaurs, this separation is done through physiological means, thus leaving them with only a three chambered heart. The goals and limitations of anatomical separation vs. physiological have not been that well studied so it is hard to say what is really "better." Anatomically divided hearts do seem to allow for higher pressures, while physiologically divided ones seem to allow for longer times without oxygen (due to possible mixing). This is an area that fully deserves more study than it has had.

Unlike the four chambered hearts of birds and mammals, crocodylians have a special valve that allows their hearts to close off blood flow to the lungs (which are useless while underwater). This blood is then shot out of the left systemic arch (left aorta) where it can join with the right systemic arch (right aorta) via the foramen of Panizza and divert oxygenated blood to the most vital areas. The crocodylian heart is, in fact, the most hydrodynamically efficient heart known to science and possibly the most complicated and advanced heart of any creature alive today (Franklin & Axelsson 1994). 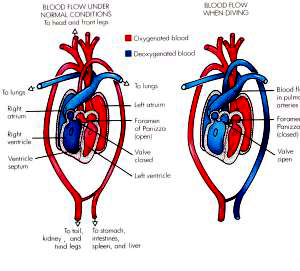 Crocodilians are archosaurs. Archosaurs or the "ruling reptiles" as the name implies are a special group of reptiles that have certain characteristics that set them apart from other reptiles. Some of these characteristics include: 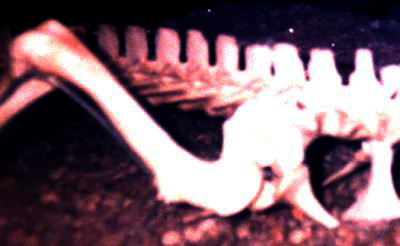 Unlike most animals, crocodylians have the ability to manipulate two different stances. Their legs can either fit underneath the body, or stick out to the side. The front legs of crocodylians do still stick out a bit in a sort of half pushup position, but the rear legs can fit right underneath the body, in a gait very similar to that of birds and dinosaurs (parasagittal). Just like birds and dinos, crocodylians can employ this method due to a perforation in their acetabulum. This hole, which varies from species to species (e.g. caimans have a nice clean fenestration in the acetabulum, while C.porosus only has a deep fossa), works in conjunction with their bent femoral heads to allow the legs to come in under the body. The crocodilian linneage has actually seen two separate evolutions towards erect stances. While today's crocodiles and many crocodylomorphs achieved their erect stance through a hole in the hip socket, the rauisuchians, an extremely ancient group of crocodilians, achieved their erect stance by moving their hips above their femora so the femora come in directly underneath the hips, rather than to the sides. This evolution is much the same as the one that mammals followed for their erect stance.

In order to fully allow the use of this new mode of movement, crocodylians had to change one more thing: the ankle. In most animals, the ankle bones(tarsals) are arranged in a manner that allows the foot to move in two linear directions (mesotarsal).

This forces either a full sprawling posture ala lizards, or a fully erect posture ala birds. In crocodylians though, their ankles are arranged in a much different manner. Their upper (proximal) bones of the ankle are split up and arranged so that the joint passes between them instead of between the proximal and distal (lower) bones like in lizards. The astragalus moves with the shank (lower leg) while the calcaneum moves with the foot. The calcaneum also bears a socket in which a peg in the astragalus fits. By placing the peg in the socket, the ankle is able to swivel 90° and handle the hard twisting movements associated with this stance. This form of tarsal arrangment is referred to as crurotarsal ("crus ankle") or a "crocodile normal ankle" and it is one of the most diagnostic features of this group.

More to stance than meets the eye

Recent work on crocodylians (Reilly & Elias, 1998) has shown that their form of locomotion is both highly derived and highly unique. It was once though that crocodylians employed a transitional sprawling and semi-erect posture and that this posture was how some reptiles went from sprawlers to upright walkers. According to this recent study, crocodylian "high walks" are actually derived from a fully erect stance and that the sprawl is a secondary re-evolution that is functionally different from the sprawls of extant lizards. With this known, paleontologists are forced to view crocodylomorph evolution completly differently. No longer should the fossil crocs be put in lazy sprawls, but should look more dynamic. Though, in this author's opinion, this should be rather obvious from the anatomy of these animals. 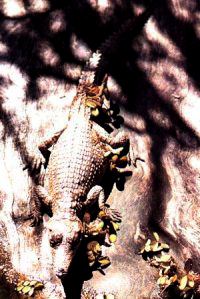 It should also be noted that the animals studied were baby alligators (Alligator mississippiensis) and none of the studies were done with adult animals of any species. Crocodylian stance is more varied than even Reilly and Elias imagined. Todays smaller paleosuchids might possibly have a fully erect gait (unfortunately there is no data to confirm one way or another) and fully perforated acetabulums of other caiman species (pers.observ) indicate that this entire group might be completely upright walkers. Indeed they seem to be the most terrestrial of the modern crocodylia.

Another important thing to note about the Reilly, Elias experiment, is the strange habit of baby crocodylians and, in particular, their rather weak femoral and pelvic musculature. Baby crocodylians all walk with a very semi-erect stance. The femora tends to stick out from the body at a 40°-60°angle. Sprawling among the young, is also more common.

A word on skulls

Crocodylians have a secondary palate that fully separates their breathing tubes from the throat and therefore allows these animals to breathe while eating or while opening their mouths underwater. It also provides extra protection for the braincase during bouts with deer and other large animals.

The eyes, ears, and nostrils are all set dorsally on the skull. This allows crocodylians to submerge most of their bodies underwater while just keeping the smallest part of their bodies visible. Truly a brilliant setup.

Although modern day crocs & gators, like their archosaurian cousins, the birds, lack their antorbital fenestras, their ancestors did have them. In many cases crocodylians solidified much of their skulls, making them strong enough to handle strong prey animals. Of course, one major problem with having such a solid skull is that it is very heavy. In order to counteract this crocodylians have fenestrated other parts of their skulls so as to lighten them, while still providing strength. Some of these passages are located at the top rear of the skull and are known as pneumatic passages. This is another feature that crocodylians share in common with their avian relatives. While these openings allow for some lightening of the skull it is also believed that they are a form of cooling system for the brain

An advancement common to all crocodylia is that of a fleshy, muscular extension at the far rear of the mouth just behind the tongue and secondary palate. This extension can be raised and lowered at will and is used by submerged crocodylians when underwater. The valve shuts to keep all water out of the throat and thus keep the animal from drowning. This adaptation lets crocodylians rest with their eyes, nose and ears above water while their mouth lay open underwater waiting for an unwary fish to swim by. This also allows crocs to drag their terrestrial prey underwater and drown it without they themselves drowning as well.
Franklin, C. & Axelsson M. 1994, THE INTRINSIC PROPERTIES OF A PERFUSED CROCODILE HEART. J. exp. Biol 186 269-288. [Article available online here
Reilly, Stephen M. and Elias, Jason A. 1998, LOCOMOTION IN ALLIGATOR MISSISSIPPIENSIS: KINEMATIC EFFECTS OF SPEED AND POSTURE AND THEIR RELEVANCE TO THE SPRAWLING-TO-ERECT PARADIGM, J. exp. Biol 201,2559-2574 [Article available online here.]