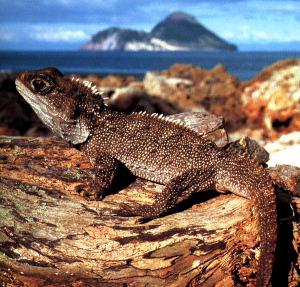 This is the little guy, who for years was considered the sole member of his genus. Since then another member has been added, so maybe now he won't be so lonely.

Sphenodon punctatus has a gray or olive color and is spotted to varying degrees over the body. They have large heads compared to bodies and either long (male) or short (female) nuchal and dorsal crests.

Males can reach a total of 60 centimeters (2 feet) and weigh in at about 1 kilogram (2 pounds). Females are smaller than males and don't usually exceed 500 grams in weight.

Any of 30 small islands off the northeast coast of the North Island. 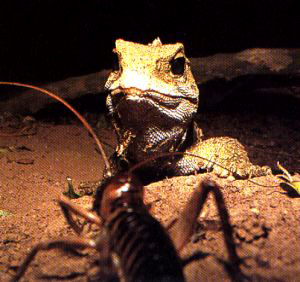 Adult S.punctatus tend to follow the technique of "sit and wait." That is they will sit and wait for their meal (an insect) to come by.

This technique works well for burrows where insects and the occasional stray bird or lizard may end up, but adults also actively forage for eggs and chicks.

Tuataras are night hunters and probably sneak up on unsuspecting sea birds while they are sleeping. They can withstand very low temperatures and are able to tolerate temps as low as 70C (450F). 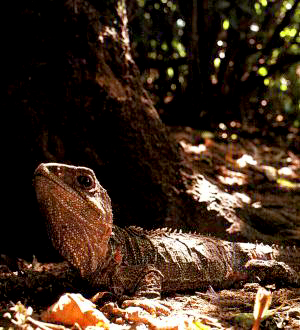 Young individuals are more active than adults and prefer the day time. They are more the foraging type when it comes to food. Their wary and speedy nature also make them hard to observe.

During the month of January, males begin establishing territories. These territories will overlap those of many females and the male (if he's lucky) will mate with each and every one of them. The males will display in key areas in their territory, in an attempt to lure females towards him.

If he, instead, attracts the unwanted attention of a male, then a territorial battle ensue. The male will first increase his size by laterally compressing his trunk while inflating his neck and elevating his crests. The males stand about 1 meter apart from one another with their heads facing away from each other and mouths agape. Then each male will begin snapping his mouth shut in an attempt to frighten off the rival. If this does not work then a fight will ensue.

Lizards are spunky fighters when pressed and tuataras, being their close relatives, seem to be as well. In a fight, the males will lock their jaws onto each other and begin scuffling on the ground. Dirt and leaves will be thrown up, the males will emit croaking sounds and the two may even flip each other over in the process. Only after one male gives up does the fight stop. And it takes a lot for a male to give up. Broken or missing toes, jaws and tails are not uncommon.

Eventually a female gets enticed by a male. At which point the male will begin slowly circling her using a stiff legged walk. He may do this for 20 minutes or more. He will only stop when the female either lets him mount her or rushes down a burrow. 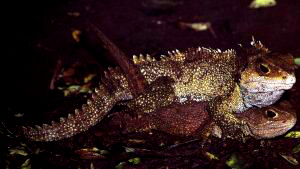 If she lets him mount her, the male will then align their tails together. Using his back legs he will move her tail out of the way and place their cloacas or vents together where sperm will then be introduced.

After the initial mating the female will hold off until spring at which point her and many other females will get together at communal nesting sites in the sunnier portions of the islands. She will then dig several trial holes until she is satisfied with the right one. After her approval of her hole, she will then lay her clutch of up to 19 soft shelled eggs (although 7-10 is more normal). Several more nights are spent filling and then guarding the hole where the eggs are. Only after every female has laid will she leave.

Tuataras have the longest incubation cycle of any reptile 12-15 months of incubation time. This is partly due to the egg's shutting down during the colder months. 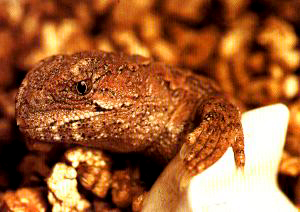 After hatching the little 100 mm (4 inch) hatchlings will scuttle off into the undergrowth where they will eventually grow to adults. This process might take a total of 11-13 years before reaching sexual maturity.

They are one of the slowest growing reptiles and are believed to attain ages of 70+ years. This is equal to the lifespans of 3-4 lizards of similar size combined.

Since tuataras are island animals, they are automatically considered endangered. Habitat destruction and the introduction of rats have added to this destruction. Luckily now, scientists are capable of captive breeding these magnificent animals, which hopefully means a bright future for these reptiles :)