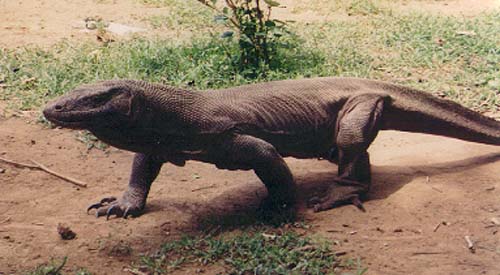 The Komodo dragon (aka: Komodo monitor or Ora) holds the record for being the largest of the lizards. Living on the lesser Sunda Islands, these monitors are the top predators of their domain. 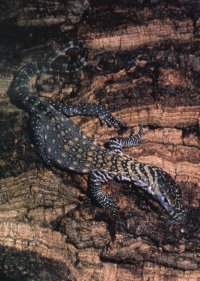 Young and juvenile dragons are adorned with a beautiful green body marked with pale yellow and black stripes running along the back complete with brick red circles that mark the neck, back & tails. Their long sinuous bodies and strong claws enable them to live comfortable lives in tree tops for the more edible portion of their lives. 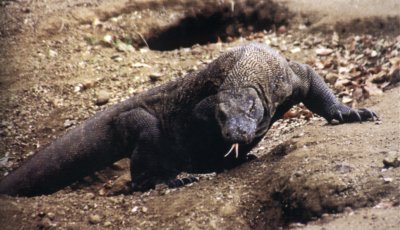 Adult dragons, on the other hand, are quite different from their younger selves. They lose the sinousness and replace it with a robust build laced with powerful muscles and thick skin. The beautiful colours that adorn them as hatchlings, are replaced by a brown to reddish grey that covers most of the body. Some individuals have dark black limbs and adults also tend to have a peach yellow colour around the eyes.

A yellow tongue is common to both adults and juveniles (a tongue colour unique to V.komodoensis)

Dragon size has been a subject of much exaggeration, with some reports stating that the animals could grow to a whopping 7 meters (23ft), but no such dragon has yet been verified.

Even the 4.5 meter (15ft) V.komodoensis used in the direct to video film: KOMODO, are too big. 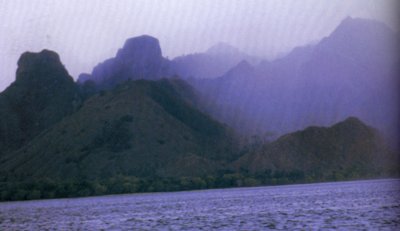 Komodo monitors live on several tiny islands southeast of Bali, in an area called the Lesser Sunda. The main islands for dragons are Komodo, Rintja (sometimes called: Rinca), Western flores & Padar. Other locales tend to hold transient dragons or real small populations, with the possible exception of Micronesia which is supposedly overflowing with them.

The habitat for a V.komodoensis consists of tropical savannahs monsoon forests and rocky hills. Adults prefer open areas with tall grass bushes and the occasional tree, while hatchlings and juveniles prefer more forested areas where they can stay aloft and away from would be predators.

Komodo monitor diets are wide and varied. Hatchlings and juveniles tend to stick with a more arthropod related diet, sticking with insects of all sizes and small mammals and birds (eggs, hatchlings and adults). As they get larger, the diet becomes more varied including much larger animals like wild boar, Samba deer, the occasional water buffalo and unwary human; even younger dragons. Large individuals have also been seen intentionally scaring pregnant female Samba deer in the hopes that they will miscarriage, a technique that has also been noticed in the large African predators as well (Auffenberg, 1981 d). Apparently birthing fluid has a nice taste to it.

Komodo monitors spend much of their days patroling their territories in search of trespassing monitors and potential food items. Komodo montiors have two main activity ranges. A foraging area which includes a core area where the most foraging activity (and territoriality) is observed, and a scavenging area which is much larger and much less defended (if at all). The scavenging areas of many monitors, overlap each other and for the most part, confrontations are neutral.

Komodo monitor activity ranges are huge, with tracking studies showing that these lizards can move as much as 10 km/day (mean 1.8 km/day) (Auffenberg, 1981 a).

Of the 5,000 or so individuals on these islands, only a few of them are actual residents and spend most of their lives in a certain area. Due to the large number of animals combined with the small confines of their ecosystems, it comes as no real surprise that most of them are transients. Another thing of interest to note is that most residents are no smaller than 2.0 meters, thus making size an important factor in residency (almost like a retirement village).

Hunting monitors tend to stick around game trails where prey animals are known to frequent. There they will pick a nice spot in the large grass, pawing at it much like how dogs will prepare a little rest spot in grassy areas, where they can wait for potential prey to come.

When a wild boar or deer comes by from eating or drinking, the dragon positions itself until the animal gets around 1-1.5 meters (3-5 ft) from it. Then it will dash out of it's hiding place and charge towards it's prey with jaws agape. Upon impact, the monitor tears into the prey with both it's jaws and it's fore paws (fore paws are more commonly seen used in smaller prey), leaving deep gashes in the animal. If the animal had the good fortune of escaping the monitor, it still would not be out of the clear. Varanus komodoensis's drool is highly septic and any creature that gets a bite from a Komodo monitor, even if lucky enough to escape, soon falls victim to the septic drool laced with at least 4 virulent bacteria and a possible anticoagulant. If the victim doesn't die from shock or blood loss, then the infection will do the trick. Komodo monitor saliva (typically considered drool do to the copious amounts produced by individuals) has been the a popular subject in the media. It's high toxicity has lead to the false belief that V.komodoensis is venomous. This, though, is not true. The deadly saliva comes about from the very dirty mouths of these lizards (they apparently acquire these bacteria while eating carrion and their gummy mouths often get cut during eruption of the teeth when eating, thus affording the bacteria a prime habitat for thriving.)

There have been reported occasions of one or more V.komodoensis banding together in order to take down a large prey animal (e.g. A water buffalo). Each monitor would apparently take a different side and alternate attacks. While this would increase efficiency by allowing the monitors to take a break inbetween attacks (King & Zahn,98), studies by Walter Auffenberg et al, seem to indicate that this is a rare event if it happens at all.

Back to the hunt. 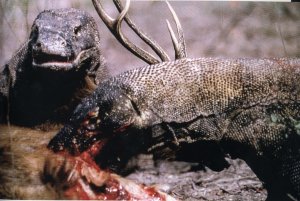 A prey animal that has been infected by a Komodo monitor's bite, after succumbing to the wound it's dead body wafts in the humid air where other oras pick it up. The deep fork in their tongue allows them to sense the dead prey from miles away and is used by all oras, to locate recently, and even week old, dead meat (though oras will rarely, if ever, eat a mummified carcass). Once there, the monitors have at it with the carcass. A wild boar killed by a single ora would probably be eaten before it drew too much attention (assuming there weren't any spectator oras), but a water buffalo or deer would be large enough to allow a congregation of oras. Once more individuals show up, a pecking order develops with size dictating who eats first and who eats most. Fights can break out, but only if two Komodo monitors happen to want the same piece of meat. This is also where most Komodo monitor social interactions take place.

Oras hold the record for largest amount of food engulfed in one feeding for large carnivores. They pack away up to 80% of their body weight in one sitting.

Courtship tends to occur anytime between January to October with the most active mating happening between July and August.

A male will scour his territory, sniffing the feces of passing dragons in the hopes that one might be in heat. If he is lucky and finds one, then he will find her and follow her in an attempt to court and mate with her. Most chance occurences happen near group feeding. The male will sniff all over her body, paying special attention to the head, neck, cloaca and feces. At this time the normally solitary dragons, become very intimate. The male will stick with the female for days in an attempt to copulate with her. He will rub his chin on her as well and if she is receptive, she will tongue lick him too. If she is not receptive then she may bite and whip the male with her tail and then run away. This may or may not dissuade him. When the female does let him in, he will grasp her with his mouth and claws and then maneuver his tail so as to position one of his hemipenes near her cloaca. The actual mating may last no more than a couple of minutes. 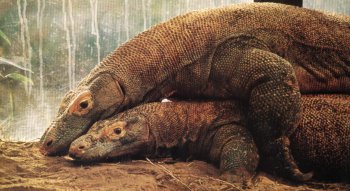 After mating, the females goes off to dig a nesting chamber for her eggs. The chamber tends to be 2-4ft deep after which she lays her eggs. She may lay 26 or more eggs. After egg laying, she covers the hole and leaves. Some dragons lay their eggs in the same burrow or cave that they live in, thus affording the eggs some protection.

After 237 days of incubation, the babies hatch. At this time, their mortality rate is exceedinly high. Adult dragons can and will kill babies for food (in particular, if they cannot find any other source) along with predatory birds, snakes, the occasional boar and (now) feral dogs. The babies will spend most of their time in the trees hunting little lizards and insects until they are either large enough to come down, or too large to stay up. At this time they will take larger prey items, and even join in on carrion feasts.

On his trip to Komodo, Walter Auffenberg noticed an interesting behavioural complex between two large monitors (19W and 23W) which seemed to indicate that among the larger monitors, monogamy might be common. This makes more sense than it might seem. Pair bonding is a safe way of continuing the species in a group of animals where both genders are capable of inflicting mortal wounds and where cannibalism is not uncommon. By pair bonding, the chances of a fatal attack during a messed up courtship fall greatly. Along with sharing the same territory, these animals were also observed in unconsummated courtship displays, a behaviour that is seen in many monogamous birds that is used to strengthen pair bonding and recognition of individuals. (Auffenberg, 1981 b)

As an island species (numbering about 5,000 individuals total) these animals are automatically listed under CITES appendix I, which means that they are considered endangered. As for human interference, oras have gotten off pretty lightly. Their osteoderm laiden skin makes them unsuitable for making boots, or purses out of, and the addition of human livestock to their islands has actually increased the variety of food for them. They have no natural predator once adult, nor have they any competitors. The closest things are feral dogs, who might attack a young dragon while in a pack, but wouldn't dare attempt to get in the way of an adult that might decide to make a meal of it. The worst interference on these animals would have been the intentional feeding of them by villagers and tour groups to keep them happy and away from their villages. This has lead to a rapid taming of the animals along with fatter more lethargic individuals. Much of this intentional feeding has now stopped and the predator within has begun reawakening. 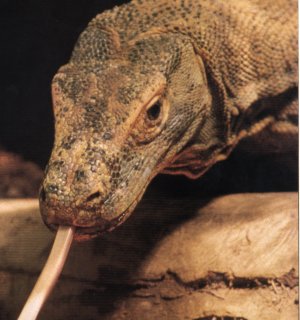 Komodo dragons in captivity tend to tame down real quick. Not only that, but they also learn to recognize their keepers and will follow them around the enclosure begging for food or sniffing for information. They will even ignore individuals that are not their keepers. One such keeper, Joan B. Proctor, would walk with the dragon around it's enclosure while holding it's tail like a leash (Lutz & Lutz, 91). Their nice temperment in captivity is one of those traits that rarely gets publicized, but if it weren't for their large size and specific caging & food requirements, oras would probably make great reptile pets.
Back
Home
Auffenberg, Walter, 1981, The Behavioral Ecology of the Komodo Monitor, Florida University press, pgs: 90(a), 170-174(b) 202-203(c) 262-265(d),