As chameleons went from flatfooted ground dwelling lizards to arboreal aces, their bodies have undergone a series of changes that have allowed these animals to better survive in their environments.

The chameleon bodyplan differs from that of most lacertilians in that it is more laterally flattened. This setup has serves a two fold purpose. First it makes the lizard larger to predators and rivals and second it allows them to better blend in with the surrounding foliage (a laterally flattened chameleon has a better chance of not casting a shadow on its branch than a more dorsoventrally centered lizard.

To aid in the area of scare tactics, chameleons also possess an intricate series of lungs. With the exception of varanids, chameleons possess more complex lung structures than other lizards. In some species the lungs extend virtually throughout the body, allowing the chameleon to puff up for defensive and courting displays. Some have smooth, undivided lungs while others possess complex, partitioned ones. When a chameleon feels the need to look large and in charge it can inflate its lungs to increase their size. The degree of inflation depends on the chameleon and the situation.

Unlike an anole or iguana, chameleons possess appendages that were made for clamping onto the various twigs and branches in their environment, thus making them better capable of going out on a limb :) 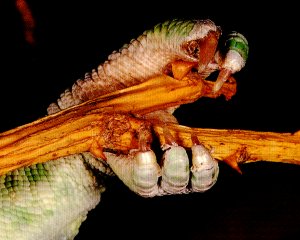 The gripping hands and feet are arranged like mittens with one side made up of three digits while the other side takes the last two. Front feet have two toes bundled on the outside and three on the inside with the rear feet in the opposite arrangement.

Their wrists and forearms allow chameleons to swivel their hands and feet so as to better grip the surrounding terrain.

The tail is prehensile in most species (exceptions include Brookesia) and curls up when at rest. 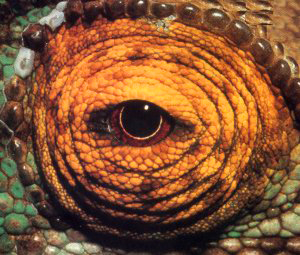 All chameleons house large turreted eyes with the ability of independent movement. This allows chameleons the ability to look forward and backward at the same time and when they are fixated on their prey, the ability to allow for stereoscopic viewing as well. No other animal has both 3D vision and the advantage of seeing to the side and behind. How chameleons brains can process all this shifting, complex spatial information is a true enigma, but it has allowed them to assert themselves as the predatory plant dwellers that they are.

A quick note on the tongue

Other than colour changing, the most recognized part on a chameleon is most definitely its tongue. Chameleon tongues have undergone a degree of specialization that has caused them to lose the sensory capabilities of their ancestors in favour of a mini harpoon to ensnare their prey. Mini might be an understatement though as chameleon tongues can go from 1 to 11/2their owner's body length.

For more on the chameleon's tongue and how it works, head here.

Chameleon size ranges from the 2.54 cm (1 inch) Brookesia minima to Chamaeleo parsonii which can come in at nearly 1 meter (around 3 ft)

Horns crests and all the rest

All chameleons have extensions off the back of the head. These are referred to as casques and can look anywhere from hardly noticeable to the astounding, Torosaurusesque casque of Chamaeleo calyptratus. Snout crests are referred to as canthal crests and can end at the tip of the rostrum in dramatic protruberances such as those on Chamaeleo parsonii.

Among their amazing array of appendages, horns are one of the most common among chameleons.

Most chameleon horns aren't horns at all. Called rostral protuberances, these are scale covered growths that sprout above the nostrils and range in size from unobtrusive knobs to twin crests that flare above the nostrils.

Unlike true horns, these are often flexible. Examples of such protuberances include the double spatula like canthal crests of Bradypodion xenorhinus and Madagascar's Chamaeleo gallus which grows a flexible scale-covered blade as long as its head.

While the distribution of species with rostral protuberances extends from the east coast of Madagascar to the Atlantic coast of Africa, only a minority of african species, such as Jackson's, Johnstons, and Fulleborni chameleons, grow true horns with bony cores and. keratinized sheaths. The horns grow in rings (annulated). In some species the females grow only minimal horns or no horns at all. Male Jackson's chameleons grow three horns, one from the snout (rostral) and two above the eyes (orbital) while most females grow a small rostral horn at best, but there's a good deal of variation among the females throughtout the Jackson's range. Most chameleons with true horns grow three like the Jackson's, but C.quadracornis flaunts four (most of the time).

Chameleons use their horns for both display and combat. Charging toward their enemy with open mouth, these lizards lower their heads and ram their opponents. These battles are mostly intraspecial and then, usually between competing males. The battle is usually a head to head turf war, but an occasional stray poke of a preorbital or (the usually longer) rostral in the eye or lung, could be extremely damaging to the lizards in combat. Scientists have witnessed battles such as these among Jackson's and Johnston's chameleons. Males with larger horns have an advantage because they can strike their opponent before his horn reaches them. Lizards equipped with rostral protuberances push each other around, but don't inflict permanent injury unless they bite. These battles might shed light on what ceratopian dinosaurs did with their horns.

Another function of these horns and protuberances is in areas of high density interspecial communities. Closely related species occupying adjacent or overlapping territories recognize members of their own group in part from the presence or abscence of protuberances. If the protuberance is removed, neighboring chameleons act confused, unable to decide whether the bare chameleon deserves a territorial warning or not. This behaviour shows an example of what Lambeosaurine dinosaurs might have used their ornamental crests for as well.