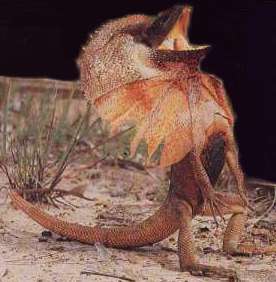 |Appearance |Size |Distribution |Habitat |Behaviour |The Frill |Bipedalism |Diet |Hunting |Reproduction |Species Status| |Photo credits
Also known as frilled dragons, and frilly-neck lizards, Chlamydosaurus kingii is a hallmark of Australia, these lizards are unique not just for their impressive frills, but also for their bipedal locomotion. Back in 1989, scientists Richard Shine, and Robert Lambeck did a comprehensive study on the natural history of this unique squamate. To date, no other study on Chlamydosaurus has been so thorough. Much of the information cited here, comes from that study.

Everyone knows a “frilly lizard” when they see one. Even amongst people who commonly lump all lizards together as one generic animal, Chlamydosaurus still comes out as highly recognizable. Two main components of their morphology give them away.

Chlamydosaurus kingii is large, as lizards go. This species seems to average around 22.1 mm (8.7 inches) in snout to vent length, with a total length that can exceed 90 cm (35 inches). Size dimorphism has been noted in this species, with males being the larger of the two sexes (Shine & Lambeck, 1989).

Chlamydosaurus kingii is found throughout the northern part of Australia.

Frill-necked lizards inhabit tropical savannah woodlands, characterized by a strong demarcation in seasons. There are two main seasons (and two short, transitional seasons) in this part of Australia. The dry season, which lasts from May to September, and the monsoonal wet season which is shorter; lasting from December to March. Chlamydosaurus kingii is a conspicuous component of its environment, in both terms of behaviour, and abundance (Shine & Lambeck, 1989).

Trees Down? Frilled dragons are regarded as a primarily arboreal species. Given that these lizards spend 90% of their time in trees (Shine & Lambeck, 1989), calling them arboreal seems understandable. However I feel it is pertinent to point out the hunting strategy of these animals.

Most of the day is spent hanging on the trunks of eucalyptus trees. Chlamydosaurus kingii often cling at a level of 2-3 meters (6.56 – 9.84 ft) from the ground (Shine & Lambeck, 1989). From there the lizards survey their territory looking for the movement of suitable prey (often invertebrates). Once prey has been spotted, the lizards hop down off the tree, and run over to snatch up the prey item. After the little invertebrate is eaten, the lizards run back to their tree and resume scanning. As such, it seems somewhat misleading to call these guys arboreal. It would seem more accurate (if not more convoluted) to call them facultatively arboreal. That is to say that these lizards use trees as roosts, but do their actual hunting on the ground.

Frill-necks don't seem to have much of a preference for any one tree species, though they do seem to shy away from the eucalyptus tree: Eucalyptus confertiflora. Individual lizards show no allegiance for any one tree either. Lizards rarely stay in the same tree for more than a day at time (Shine & Lambeck, 1989).

Chlamydosaurus kingii are strongly affected by the seasons in Northern Australia. During the middle of the dry season (April – August), few individuals are found active. As storms start brewing in preparation for the wet season, frill necks start becoming active, and can often be found in abundance (Shine & Lambeck, 1989). This lasts throughout the wet season, as long as there are no long rainless stretches. 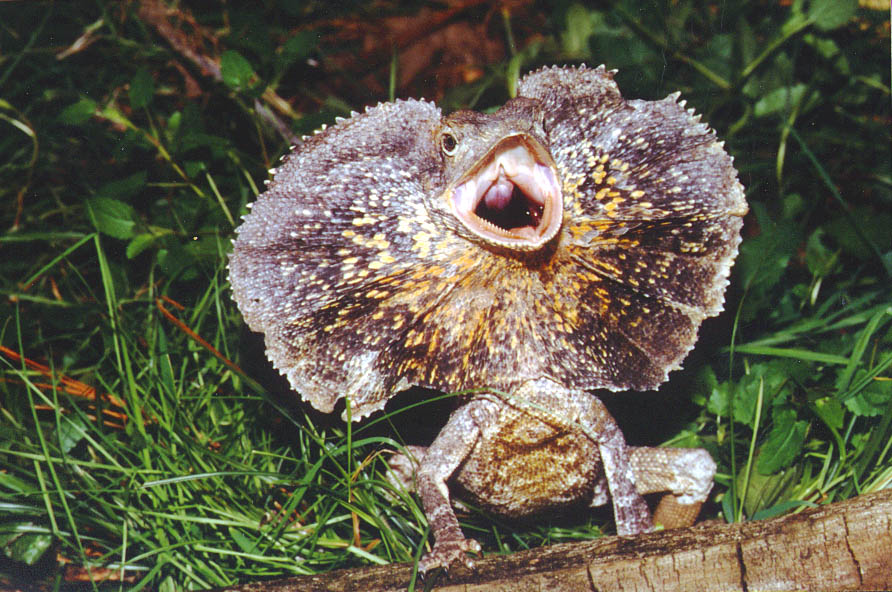 Unique to Chlamydosaurus is a frill of folded skin that normally lies around the back of the head, and down the base of the neck. When alarmed, or when doing territorial signaling, the frill is erected by two extensions of the hyoid apparatus (a floating bone that is used as a point of attachment for the tongue). Once extended, the frill forms an impressive display; easily quadrupling the apparent diameter of the lizard's body (Shine & Lambeck, 1989). The frill's size is so large that Chlamydosaurus kingii actually evolved a longer neck to accommodate it. This increased neck length may have created another benefit discussed below.

By far the most striking bit of information acquired by Shine and Lambeck, during their 5 year study of Chlamydosaurus kingii, was the observation of true bipedalism in this species. As the authours put it:

“Chlamydosaurus are apparently unique among reptiles in using bipedal locomotion during routine foraging. ... Of 10 observation sequences in which lizards descended to the ground and seized prey items; terrestrial locomotion was exclusively bipedal in nine.” (Shine & Lambeck, 1989).

The single outlier that the authours mention, is a specimen that grabbed an insect that was right next to the tree it was on. 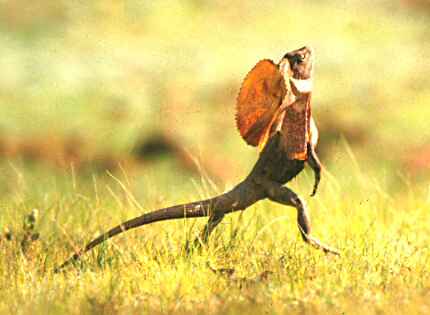 Chlamydosaurus kingii doing a foraging run.
Bipedalism has, of course, been noted in several lizard species (e.g. Basiliscus, Dipsosaurus, Physignathus, Cnemidophorous). However, the type of locomotion seen in frill-necks is different from that observed in other lizards. For many species of facultatively bipedal lizards, bipedalism only shows up during high speed runs. For the most part, it is an escape technique. Frilled dragons use this technique too. In fact, probably the most iconic image of Chlamydosaurus kingii would be those shots of these lizards running towards the camera with their frills out and mouths open. It is important to point out that the bipedal escape run of a frilled dragon, is different from a foraging run. For more on that see below. Frilled dragons stand out from other bipedal lizards in that they can move bipedally even at low speeds. As Shine & Lambeck pointed out in their paper:

“The major problem faced by other bipedal lizards is that their centre of gravity is so far anterior of their hind legs that they fall forward as soon as they slow down.”

Chlamydosaurus is capable of moving bipedally at various speeds because it is able to pull its upper body further back, and place its head over its hind legs. This allows these lizards to maintain balance at a variety of different speeds. Shine & Lambeck suspected that this was accomplished in this genus (compared to other lizard species) through the evolution of a longer neck. The longer neck allows Chlamydosaurus kingii to place its head posterior to its hips, thus maintaining balance while standing on two legs.

Frilled dragons are insect eaters. Of that, there is no doubt. While some small vertebrates have been found in the stomachs of frilly-necks, they are always fragmentary, and were likely the result of accidental ingestion (Shine & Lambeck, 1989). No, the main component in frilled dragon diets, are insects. In particular, insects of the orders:

Of these, it is the lepidopterans that feature most prominently in the diets of frilled dragons. In particular, larval lepidopterans (i.e. Caterpillars). Over half of all lizard stomachs contained caterpillars (Shine & Lambeck, 1989).

Just as interesting as the diversity of prey items, is the amount ingested by Chlamydosaurus kingii. One stomach flushed female was found to contain an estimated 1250 termites (Shine & Lambeck, 1989). When frill-necks eat, they gorge.

Frilled dragons, like most iguanians (Iguanoidea), are sit and wait foragers. The majority of their time is spent clinging to trees, looking around for likely food items. Lizards rarely spend more than 5 minutes on the ground at any one time (Shine & Lambeck, 1989). Their vision must be fairly acute, as the average distance traveled during each terrestrial foray was about 39.9 meters (130.9 ft). All hunting is done in the early morning, or late afternoon, comprising about 4 hours of foraging per day. 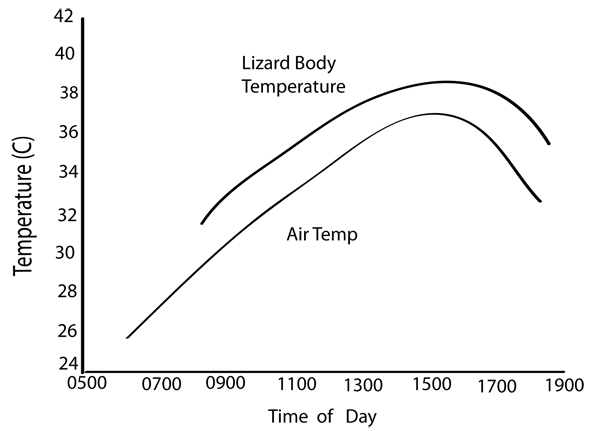 This relatively limited amount of foraging time is most likely due to the thermal uniformity of frilled dragon environments. Though Chlamydosaurus kingii lives in areas with many tall trees (up to 20 meters [65.6ft] in height), the thermal gradient between ground level and tree level is less than 1° (Shine & Lambeck 1989). As such, these lizards are forced to be thermoconformers. Given how hot their habitat can get (37°C [98.6°F]), it is understandable that thermal windows are going to be small. Interestingly, though Chlamydosaurus kingii is a thermoconformer, it still maintains an active body temperature that is slightly higher than its surroundings (Shine & Lambeck, 1989). This is probably done to maintain a negative thermal flow (i.e. to make sure heat is always leaving the lizard's body, rather than entering it, thus keeping the lizard “cool”).

Just like everything else in the life of frilled dragons, sex is a very seasonal thing. Mating season co-occurs with the dry season, and seems to last from July – December. Chlamydosaurus kingii seem to devote most of their time in the wet season, to eating and building up fat reserves for the long dry season. Then, as the dry season draws to a close (around October), they start focusing on mating.

Females lay from 4 – 13 eggs, and deposit them during the monsoon season from December to February (Shine & Lambeck, 1989).

As mentioned earlier, sexual size dimorphism is present in frilled lizards, with males being the larger of the two sexes. Like most other iguanians, Chlamydosaurus kingii is a territorial animal. Males guard home ranges and engage in vigorous territorial displays with other males (Shine & Lambeck, 1989).

As they stand right now, frilled dragons are considered to be "secure" (G5), according to the Nature Conservancy. That means these guys are doing pretty well, and are not in any current risk of extinction, or endangerment.
Shine, R., & Lambeck, R. 1989. Ecology of Frillneck Lizards, Chlamydosaurus kingii (Agamidae), in Tropical Australia. Aust. Wildl. res. Vol. 16: 491-500.