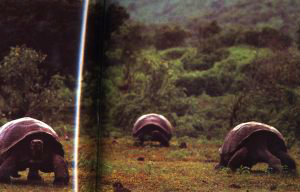 Since the first turtle like animal appeared some 280 million years ago, chelonians have spread to all the parts of the globe. There has been everything from tiny turtles in the tropics to Tremendous Testudines in the tundras of the Tertiary.

This is where the first "true chelonians" appeared. Or at least where we have found the oldest turtle like animals. They seemed to have gotten their start in Europe in what is now Germany. These animals had the typical turtle features at first glance, but upon closer inspection we see that these Proganochelyids had teeth in their mouths along with some strange scute arrangments and the beginnings of pectoral girdle modification are evident. Also during this time, the first pleurodire, or "side-necked" turtle showed up. These turtles, instead of retracting their neck in a hidden U curve, fold their necks to the side of the shell and have thus marked cervical modification. The anterior zygapophyseal attachments of their 6th & 7th vertebrae have grown forward together. They also formed a strong cup and ball joint with one another, thus allowing these turtles to make quick lateral movements of the neck. Proterochersis was its name, and by this time it had already shown the fused pelvis unique to this group. That these traits were already present, along with the sudden appearance of a turtle bodyform in the fossil record, indicate a rapid burst in chelonian evolution, during their early days.

These ancestors of the great chelonids would soon spread out over the world.

During the Jurassic, the major group of chelonians became the Amphichelyds and they started to colonise all the world's oceans. These amphychelyds showed some major modifications compared to their progenetors. They had lost the teeth in their mouths and replaced them with the self sharpening beaks, their plastron now reached the carapace and the ribs have become fully incorporated into the shell. At this stage though none of them could as yet retract their heads into their shells.

The early Jurassic saw the arrival of the worlds first sea turtles. One such family known as the Thalassemydidae shared some convergent characters with today's sea turtles. They had at least 11 members in this group showing that chelonian diversity was already on the rise.

Another group called the Aperotemporalidae also roamed the worlds oceans, but are less well known.

The Jurassic period saw the rise of the first Cryptodires or "hidden neck" turtles. Today the Cryptodires form all but 2 of the extant 13 families and have some very interesting modifications to their cervical verts. In order to perform their amazing U shaped curve into the shell, the transverse processess on the vertabrae, along with the dorsal spines have been greatly reduced and the overall flexibility of the neck has been increased as well. This flexibility was afforded by a major change in the 9th cervical vertabrae wherin the anterior zygapophyseal facets (portion of the vertebrae that form a joint between other vertebrae) rolled back allowing for a high degree of vertical and lateral flexibility.

The first true cryptodire was Kayentachelys, which made its appearance during the mid-Jurassic of North America. The cryptodirans did not descend from the pleurodirans. Rather, each group represented a different solution to the same problem.

The Cretaceous saw an explosion in sea turtle diversity, with over 15 genera present. It also saw the appearance of the largest chelonian known to science: Archelon ischyros , or: "The king turtle". This great sea turtle grew to lengths in excess of 20ft and had a shell width of 12ft at it's widest point. This was simply one huge turtle. This turtle would need such size against the likes of the many mosasaurs that lived along with it. It's hooked beak might have been used to grab at fish. But, if Archelon ischyros mimicked Dermochelys coriacea in lifestyle then it might have perhaps ate large jellyfish instead. Of course those had to be some freaky huge jellyfish.

The survival numbers for non-dinosaurian/non-marine reptiles isn't well known. The evidence so far, though, seems to indicate that with the possible exception of the squamates, chelonians survived the K-T extinction better than any other reptilian groups. Where 15 species were known to have had lived to the end of the Cretaceous eight of them survived to move on into the Tertiary. Still a hard hit, but slightly more than half survived.. Plus after the catastrophy and the loss of two more families in the succeeding Eocene period, the Tertiary saw the rise of many new families including the most diverse of today, the emydids.

As the most diverse of the extant chelonians, the emydids first got their start in the Eocene, just after the K-T extinction. They included the forerunners of the genus Trachemys which holds among others, the red eared sliders which were once a popular dime store pet.

These were the first chelonians to make the venture back onto land and are thus a very important group. Their distribution over the continents was just beginning again and these animals were beginning to colonise North America.

During the Oligocene Period, France was being colonised by the relatively large, 75cm (30in) chelonian Broilia. This genus had cartillaginous attachments connecting the plastron to the carapace and making for a very flexible link on both sides. These animals had rather domed shells and were semi terrestrial. But the true terrestrial wonders were yet to come.

The Testudines which comprise the tortoises seemed to have arisen in Africa or North America where they seemed to be forest species. At the time they still had flat shells reflecting their aquatic ancestry, but soon that would be replaced by the more physiologically important dome shell which allowed for greater lung capacity. Their stance also changed and many Testudines become fully functional digitigrades (the toe walkers).

It is believed that their was once over 200 different species of tortoises alive. Today that number has been greatly reduced to 30. Their ranges encompassed North America, Eurasia Central and South America and Africa. Soon though they would go even farther.

Testudines can reach huge sizes. While today we have Geochelone nigra at around 4 feet long as the largest land turtle, back in the Pleistocene there was a huge tortoise by the name of Colossochelys atlas. This animal grew to the size of a VW Beetle and ranged throughout Asia.

Throughout the Tertiary chelonians had colonised all of the world. They lived in the Americas, Africa, Eurasia and Australia. They even lived in Antarctica.

Of all the chelonians in the world, these were some of the strangest. Meiolaniids were large testudines that had horns projecting from the sides of their heads, and clubbed tails. In many ways, they were chelonian versions of ankylosaurian dinosaurs. They are considered to be branches of the cryptodira. They lived almost up until the present day.

These guys got their start in South America, and eventually made it into Australia. Such a migration is interesting because it not only shows the origins of these animals, but in order for them to have started in South America and wind up in Australia, they would have had to have lived, at least partly, in Antarctica. The existence of chelonians in Antarctica from the Cretaceous (which cladistic evidence seems to indicate their starting point) all the way up to the Miocene give a fair indication of just how recent Antarctica's deep freeze was.

Today chelonians have lost a lot in terms of species number, but only a little in terms of diversity, They live all over the world in the forests of Eurasia and deserts of Africa, to the islands of the Galapagos and the frozen waters near the Arctic. Throughout their 280 million year reign chelonians have proven to not only be successful adaptors, but also efficient diversifiers.

Not bad for a group of critters with huge slabs of bone strapped to their backs. :)