If a virus can get sick, is it alive? 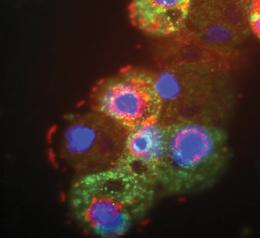 A new paper in Nature has discovered that at least one known virus strain can get sick.

The virus in question has been dubbed: mamavirus. The name stems from the giant size of the virus. Mamavirus is bigger than some of the smallest bacteria, with more than 900 genes. The neat thing, though, was not so much its large size, but the presence of a smaller “satellite” virus deemed Sputnik. Under “normal” circumstances when a mamavirus infects a cell it uses the proteins its genes encode, to hijack the cell’s metabolism and thus create more viruses. When Sputnik is around, though, the rules change. Sputnik hijacks the hijacked machinery, resulting in malformed versions of the mamavirus.

In human world terms, Sputnik gets mamavirus sick. Sputnik is, thus, the first example of a virophage – a virus that infects other viruses.

All in all a fascinating find; but what of the broader implications of the article. If mamavirus can get sick, then does it qualify for life?

There are, or used to be (more on that later) five criteria for life. They were:

In order to be alive, a candidate must satisfy all five criteria. So plants, animals, fungi, protists and bacteria all passed with flying colours. Rocks fail, as they neither metabolize, adapt, or reproduce (they can grow and do evolve though).

Biochemists in the crowd might point to prions. They do reproduce, but they don’t grow, adapt (resist, but not adapt), metabolize or do anything else like life. For the most part, prions are just malformed proteins. They reproduce by infecting nearby proteins; a case more similar to limb rot, free radicals, or erosion than true reproduction.

Viruses, on the other hand, get real close. They reproduce, grow, move and adapt. The one thing that they don’t do, is metabolize. In order to metabolize, a virus must steal the metabolic “machinery” of another living organism. Because viruses lack this fundamental requisite, many biologists and biology textbooks place them just outside of life.

Think about this though. A virus acts just like other living things. It just needs a little help to do some parts. Viruses are not self sufficient, but that shouldn’t relegate them from the status of alive. There are lots of animals today that must steal the resources of others in order to survive. We call them parasites. One of the evolutionary hallmarks of parasitism is a streamlined genome. Depending on the degree of parasitism going on, a parasite could remove limbs, sensory organs, digestive processes, and even some reproductive material. In effect, a highly evolved parasite can easily be mistaken for a primitive relic.

So too with viruses. What if they were cells that reduced their extraneous evolutionary baggage so much that they now fall outside of the traditional criteria for life? There is currently no way of knowing if this is true, but at the very least it would seem that viruses should warrant an honourary placement within the realm of life.

The argument oscillates back and forth between life and non-life. This is good as it forces us to look harder at the criteria for life.

However, there is another group out there that tends to poo poo all this semantic talk. They are the same group that thinks the arguments over Pluto’s status as a planet are useless (because they think the concept of planet is useless), or that species are a pointless arbitration. In this case the argument is that the criteria for life are all arbitrarily chosen. That life is a continuum from non-living to living, with no real demarcation, and thus no real value in being defined.

I disagree wholeheartedly. There is an obvious turning point between what is alive and what is not. If viruses are skating the edge of this line then all the better for us. Defining what constitutes life is extremely important. If we don’t know where this line lies, then we are unable to determine what makes something alive to begin with. What is it about a cell that is so unique compared to a small rock? What is so special about this particular chemical makeup?

From a deep philosophical view, the definition of life would seem all the more important. If one wants to find out what makes humans unique, then it would help to know what it is that determines their life in the first place. For bioengineers, knowing the criteria for life, gives one a chance to actually create life. Abiogenesis scientists (those who study the origin of life) would be lost without some kind of definition for what it means to be alive.

I just don’t understand how some scientists, of all people, can make these arguments about the uselessness of arbitrary definitions. How do they expect people to talk about these things if there is no way to name, or categorize them? Conceptual terms might come with baggage, but the instant definitions and criteria that they come with, more than make up for it.

Take the planet example. If two astronomers were talking about finding some new planet, I would immediately be thinking of a massive celestial body orbiting a star, and being large enough to be round. If, on the other hand, they were talking about finding some new dwarf planet, then I would imagine a smaller object that may, or may not be completely round and is probably not orbiting a star (at least not very close). Having a definition in place already, removes the necessity of figuring out how big, or how erratic the orbit will be. If the goal is to look for life, I can probably skip the dwarf planets and focus on the real planets.

If we removed the term planet altogether, then what would astronomers talk about finding? They found an object. How big is it? What kind of orbit does it have? Is there an atmosphere, or a star? Many of these questions can be answered quicker by having the definitions that we currently have.

All the more reason why this urge to purge useful arbitrary definitions from the scientific lexicon, is disturbing. I would like to know what proponents of these ideas suggest we use in place of these names. To date I have heard no alternative brought forth.