_Microraptor gui_ to be featured in tomorrow night’s NOVA. 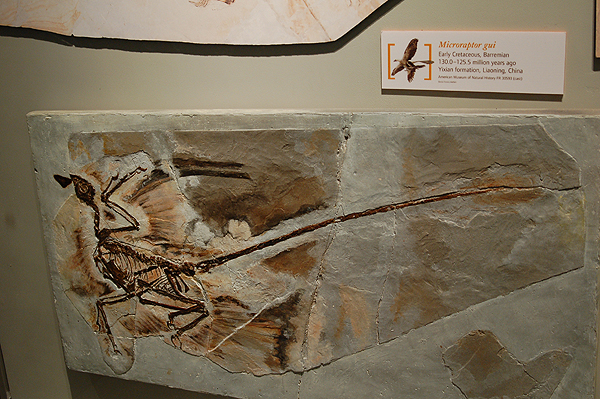 Tomorrow night on PBS (Tuesday, 26 Feb. Check local listings), NOVA will be doing a special on the “four winged dinosaur” Microraptor gui.Microraptor was a dromaeosaur (think Velociraptor or Deinonychus) that was discovered back in 2000. It was part of the infamous “Archaeoraptor” fiasco, in which Chinese collectors had tried to pull a fast one on paleontologists by selling a chimeric fossil that was part bird and part dinosaur. Though the truth was eventually sussed out, it didn’t come fast enough. National Geographic had jumped the gun on the find, touting it as the perfect transitional fossil between dinosaurs and birds. When the truth came out, NG had egg on their face and the creationist camp had more artillery in their cannons.

Now eight years later we have a far more interesting story to accompany M.gui Not only was it the smallest dinosaur known (~0.5 to 0.7 meters, or a little under 3ft in length for the imperial crowd), but it had wings…

on all its limbs.

That’s right, it was a four winged animal. A creature that sounds more at home in an old Greek myth rather than reality. Yet it was real. How neat is that?

So now we know of its existence, the next most obvious question is: How did it fly?

Okay, for some the question might be: could it fly?

Given the anterior wing proportions, and the fact that, well, it had a lot of wings, I find it hard to believe that Microraptor wasn’t flying. How it did so is the real kicker. Yeah, it might sound like an easy answer. “Why, it just splayed all four limbs out.” Okay, but did it flap all four limbs? Were the lower limbs used for balance, while the upper limbs did all the work? Could Microraptor have splayed its hindlimbs at all?

As a dinosaur, it seems very unlikely. Dinosaurs achieved their infamous erect stances, partly by locking their femora (upper leg bone) into their acetabula (hip sockets). This made for a very stable stance, but one that was not very forgiving when it came to lateral excursions. To date, no dinosaur, and no dinosaur descendant (i.e. no birds) could/can splay their femora.

So was Microraptor the exception that proves the rule? Judging from the NOVA trailer, there is at least one team that thinks so. Will they be proven right? We’ll just have to tune in tomorrow to find out.

For folks (like myself) who don’t have access to the broadcast, the show will be available for streaming the day after on the official site. Make sure to check it out.