This upcoming Sunday (9th December), National Geographic is going to be airing a special devoted to the dinosaurs (and other interesting critters) of the Junggar basin. The overall information conveyed should be interesting. The less than stellar CG models should not. Seriously, in the land of dino docs, National Geographic has got to have the smallest budget. Whatever though, it’s a documentary. The actual look shouldn’t matter all that much.

That said, be prepared to hear a lot of nonsensical roaring. Oh, and seeing Guanlong with an idiotic mane. 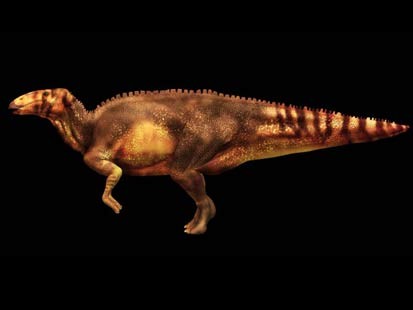 The second part of the special deals with a finding here in the states. A hadrosaur by the name of: Dakota. The species has yet to be worked out, but that’s not so important as the fossil itself. Dakota represents the most complete dinosaur ever.

See Dakota is a mummy. Not the Egyptian kind (obviously), but the same basic premise. Basically this hadrosaur wound up getting buried in anoxic material faster than any bacteria had a chance to degrade it. Not only does Dakota preserve skin (which many other hadrosaur mummies have done), but it also preserved muscle tissue, and tendons. Who knows, there might even be some viscera in there.

Everything is still pretty hush hush until after the NG special. All that’s really been released so far is that the evidence from the mummy shows that dinosaurs were much longer than previously thought, and that Dakota had a far more muscular hind end than anyone imagined. This extra muscle has been (speculatively) translated into faster running speed for hadrosaurs. The current media blitz has everyone believing that hadrosaurs could outrun Tyrannosaurus rex. To be honest, that is taking the speculation a bit too far. This data is interesting for what it tells us about hadrosaurs. It doesn’t really say much about T.rex.

That said, I don’t really see a problem with the thought of hadrosaurs being faster. Despite what all the T.rex fanboys would have the world believe, T.rex was just another predator. Like most predators it probably had a kill ratio that was pathetically low (i.e. it lost most of what it hunted). There’s nothing wrong with that. Hadrosaurs evolved with tyrannosaurs throughout their geological history. If tyrannosaurs were so good that they “got one” every time, then it wouldn’t seem very likely that hadrosaurs would have lasted as long as they did.

Plus, there were a whole lot of hadrosaurs back then.

Anyway, this is my heads up for folks who don’t know. The air date is December 9th at 9 EST (8 C/P). That’s all American time. For the rest of the world, feel free to adjust GMT to your respective times.

For more on the whole show, check out NG’s official site for it: